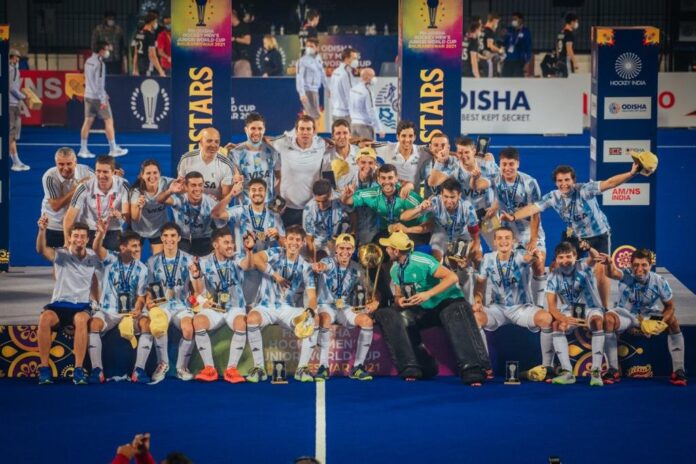 Domene’s achievement was made more remarkable by the fact that Argentina won just three penalty corners in the entire match, with the drag-flicker finishing with a 100 percent conversion rate as his team added a second men’s Junior World Cup title to the one claimed in Rotterdam in 2005.

The result ended Germany’s quest for a seventh men’s Junior World Cup title and brought the curtain down on a superb competition at the Kalinga Stadium.

Earlier in the day, France – inspired by Player of the Tournament Timothée Clément – defeated India to claim the bronze medal while Netherlands and Spain were respective winners over Belgium and Malaysia in the 5-6 and 7-8 classification matches.

An outstanding performance from goalkeeper Nehuen Hernando led the way Domene netted penalty corner drag-flicks in each of the first two quarters, leaving Germany with a mountain to climb in the remaining 30 minutes. And climb it they did, with Julius Heyner – earlier given a 10-minute yellow card suspension for a coming together with Argentina’s Joaquin Toscani – firing home from close range before Masi Phandt’s deflected penalty corner effort rocketed into the roof of Hernando’s goal with 13 minutes remaining.

However, Domene made it three penalty corner conversions from three attempts in the 50th minute before Hernando pulled off some astonishing saves to deny Germany another equaliser. Argentina sealed their second men’s Junior World Cup title when Franco Agostini fired into an empty net in the final minute, with Germany having replaced their goalkeeper with an outfield player in a final attempt to salvage the situation.

“We cannot explain our feelings in this moment”, said Domene. “It is difficult to know what we are thinking. We knew that this team could do it. We played together, as we have done in the other games. We committed as a team, and that is the most important thing. It is a craziness that we cannot explain, what it is to win this tournament. It’s beautiful, and we are very proud of this team.”

Germany captain Hannes Muller said: “First of all, congratulations to Argentina for their win. I think the first half was not good for us. Too many technical mistakes, not enough pressure on the ball. The second half was a little bit better but, in the end, we lost the final. At this moment it’s hard to understand that.”