When Army hockey travelled to Pakistan to promote gender equality 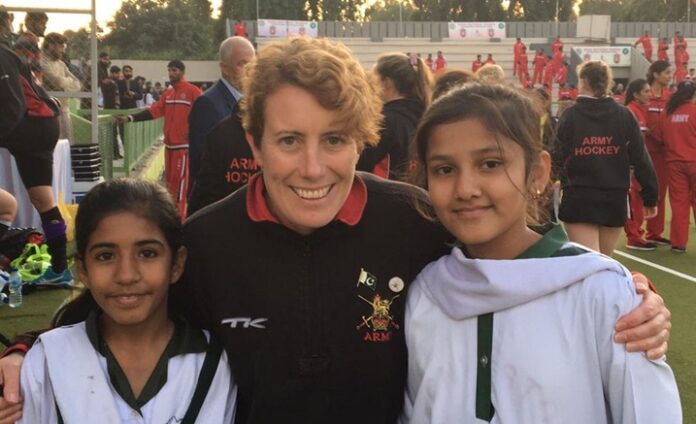 Two years ago this month, 14 members of the Army Women’s Hockey team visited Pakistan for Defence Engagement activities in support of the British High Commission and the Pakistan Army Sports Directorate. The aim of the tour was to assist in the promotion of gender equality in Pakistan, specifically by promoting the equality of women in the Pakistan Armed Forces.

5 members of the squad played for the Army Masters team in the EH Masters Tier 2 O35s Round 1 Cup match against Yateley which they won 9-0 before heading up to London Heathrow to meet the rest of the squad to catch the overnight Pakistan Airways flight to Islamabad.

The morning was spent undertaking cultural visits which include a trip to the Pakistan Monument and Lok Virsa Museum just outside Islamabad before moving on to the Pakistan Army Museum at Rawalpindi. We then moved to the Officers’ Mess in Rawalpindi where we met the Pakistan Women’s Hockey Team and joined them for lunch.

The morning was spent at the hockey pitch at Rawalpindi with half of the squad coaching the Pakistan Army team and the other half coaching approximately 40 local school girls. It was a joy to see the smiles on the girls faces and the enthusiasm and effort that they displayed, many of whom had limited hockey experience.

In the afternoon we played a match against the Pakistan Army. The atmosphere was amazing with 100s of school children coming in from the local schools to watch the match in the stands. Despite a tight 1st half the experience and fitness of the British Army team eventually showed and we won 4-0.

The morning was again spent coaching the Pakistan Army team and more local school children. The match in the afternoon was against the Water Power and Development Agency (WAPDA) team, the reigning National Games champions. It was a very close fought match in which WAPDA ended up as 1-0 winners.

That evening we were hosted by the Defence Section of the British High Commission with a BBQ at the Brit Club.

Following more coaching with school children in the morning, the 3rd match of the trip was against the Pakistan Railway Team which we won 3-1.

The final match of the trip was against a combined team from the Pakistan Army and Pakistan Railway teams. We were exceptionally privileged to have the Chief of Army Staff General Qamar Javed Bajwa and the Deputy British High Commissioner to Pakistan, Richard Crowder as the VIPs watching the match. In a fantastic atmosphere with packed stands we finished our trip with a convincing 7-1 win. At the end of the match both teams were given presentations from the Pakistan Army Sports Directorate and the British Army awarded a trophy for winning the 4-match series 3-1.

In the evening we travelled to the Serena Marriott Hotel where we were hosted by the Pakistan Army team and Army Sports Directorate staff with a wonderful meal and gifts were exchanged.

Our final day in Pakistan was spent visiting Bhurban where we were treated to fantastic views of the country. We moved to Chinar Golf Club where we had lunch and played on the putting green with the girls from the Pakistan Army team. We said our farewells and headed back to Islamabad for some souvenir shopping before our flight back to London Heathrow on Monday.

There is no doubt that this trip to Pakistan was an experience of a lifetime which will never be forgotten and thoroughly enjoyed by the entire squad. The British High Commission and Pakistan Army were fantastic hosts with excellent hockey played. Great satisfaction was gained from seeing the development and improvement in the Pakistan Army team’s hockey following the coaching we gave them throughout the week. However, the real joy was seeing the excitement of young female school children being given the opportunity to play hockey and the phenomenal support that they provided to us in the stands during the matches.

If you are interested in a great career which will give you opportunities for travel and sport, search for www.Army.mod.uk/Careers