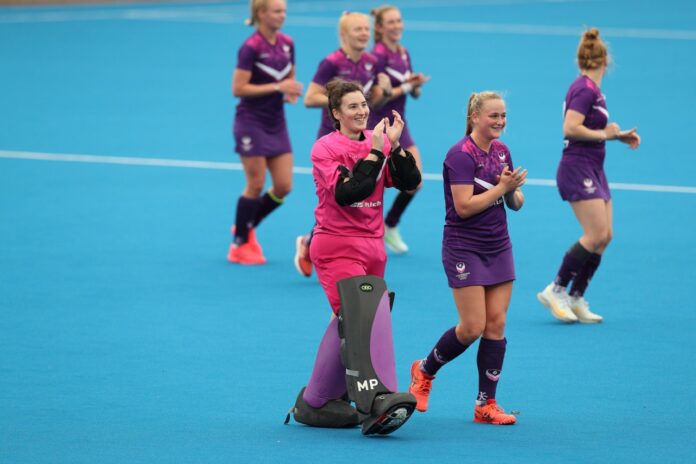 In our regular anything goes Q&A, we speak to players and coaches on topics ranging from temptations, influences, fashion sense and match teas. This week: GB EDP and Hampstead & Westminster goalkeeper Miriam Pritchard

What was your earliest ambition?
I wanted to be a chef that was in charge of all the puddings! Hockey wise, I remember telling someone in the primary school playground that I wanted to go to the Olympics.

The event that altered the course of your life and character…
I was a bit naughty in school as I had a lot of energy and nowhere to channel it! My friend Kate played hockey and encouraged me to come with her to our local hockey club for a session. After that I got involved in every sport under the sun. Sport has given me so many class opportunities and pals from all over, as well as bringing out a confident happy Mim!

You wouldn’t know it, but I’m very good at … raising one eyebrow!

The book that means the most to you (and why)
All join in by Quentin Blake! Yes, a kids’ book. Blake’s played a massive part in me wanting to be an illustrator. I love the characters he creates, full of energy and humour.

The film you can watch time and time again (and why)
Any Studio Ghibli film. They’re so beautifully made and very nostalgic.

What do you do to relax or get away from hockey?
Definitely drawing (follow Miriam @pritchards_pencil), you’ll probably find me at a cafe sketching all the locals! Also enjoy a bit of telly; big fan of Gavin and Stacey or First Dates.

I wish I had never worn…
White trousers to Echos Night Club, Loughborough.

The biggest temptation you wish you could resist is…
The Next Episode button on Netflix.

What would you do if you were invisible for a day?
Going to training and standing in the goal could be fairly entertaining!

And if you were the FIH chief for a day?
Create a fairer way of deciding the world’s best FIH players of the year.

What is the best match tea you’ve had?
At my first club Oxford HC we had some great pizza and chips.

Where did you dream about going to most during the pandemic?
In the first lockdown it was my first Easter in a LONG time I wasn’t away with hockey, so I was quite happy to spend some quality time with family. (However after a few months I did dream of going back to uni)!

Tell us about your new move this season?
Bit of a change being away from the Loughborough bubble and into the big city for me! I’ve learnt so much at Loughborough and am very proud of everything we’ve achieved but am super excited for my next adventure! Hampstead & Westminster HC is definitely a new challenge for me, but I’m loving it so far and hoping long term I will be able to help the club achieve success, not only with the English league but also in Europe.

The person who has influenced you most in hockey and why…
Paul Hogben my first goalie coach. He encouraged me to aim high, stuck with me through my stroppy teenage moments as a young goalkeeper and gave me the confidence to pursue my dreams of playing in the national team. (As well as making us train bloody hard).

What has been your happiest moment?
Getting promoted to the Premier Division with Loughborough has to be up there. Coming back from a pretty low place with concussion just three months before, it was huge to be able to play a part and help the team achieve something very special.

And the saddest?
The recent news of our Loughborough assistant coach Gibbo passing away has been extremely sad for the whole hockey community but especially the girls and team behind the team at Luff. Gibbo was a huge support to me, always up for a 1-on-1 hockey session or a chat. The energy and work he put into both the 1s and 2s programme was simply world class and I know how deeply he will be missed.

What would you change about hockey for the better?
I think more could be invested in the Premier Division – bigger events and more spectators?

What is the biggest talking point in hockey we need to know about?
Obviously the Hampstead 2s game vs Ipswich away at the weekend!

What is your best tip for aspiring players?
Have something else that you’re passionate about other than hockey. The two can help each other!

The prized possession you value above all others?
My collection of blue glass bottles.

What drives you on?
The thought I won’t achieve everything I’ve set out to.

More in our Hockey Social series…