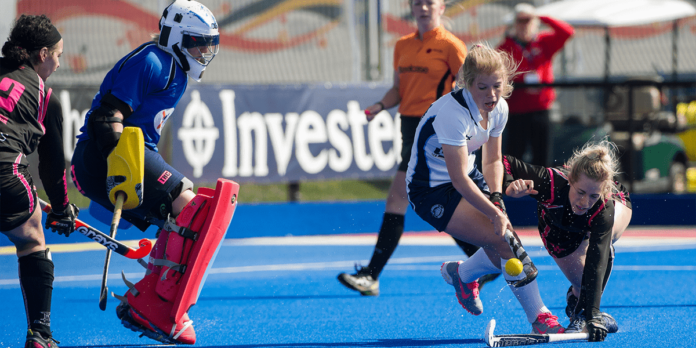 East Grinstead, top of the table in last season’s scrapped league, continued their near two-year unbeaten run in emphatic style, with a 4-1 win over Loughborough Students on the opening day of the Vitality Women’s Hockey Premier Division.

A brace from Sophie Bray, a debut goal from Autumn Bowden and a penalty stroke from Ellie Rayer notched East Grinstead’s 22nd match unbeaten since October 2019.

Missing Laura Unsworth, there were five debutants on Saturday as the West Sussex side dominated proceedings from the moment Bray latched on to a through pass and converted with an unstoppable forehand and slotted home a second before the break.

Bowden’s fine finish produced a notable cheer from the Saint Hill faithful after her rise to the first team, before Rayer flicked home from the spot. Lorna Mackenzie scored late on for the Students.

Hosts Beeston came from behind to beat Holcombe 2-1. Candice Manuel opened the scoring for Holcombe before Lucy Millington, on debut, slotted home from a penalty stroke. Fellow debutant Steph Tirrell then produced a fine save from a last-gasp PC to deny Holcombe a point.

Seven-time champions Surbiton were held to a 2-2 draw by Clifton Robinsons.

Alice Wills gave the Londoners the lead before Catherine Macauley equalised in the second quarter. Macauley then scored her second before Eloise Stenner levelled up early in the second half.

In the midday game, Buckingham and Swansea played out a 1-1 draw in Wales, with Jessica Roe scoring the league’s opening goal for the Swans before Natasha James equalised for Buckingham.