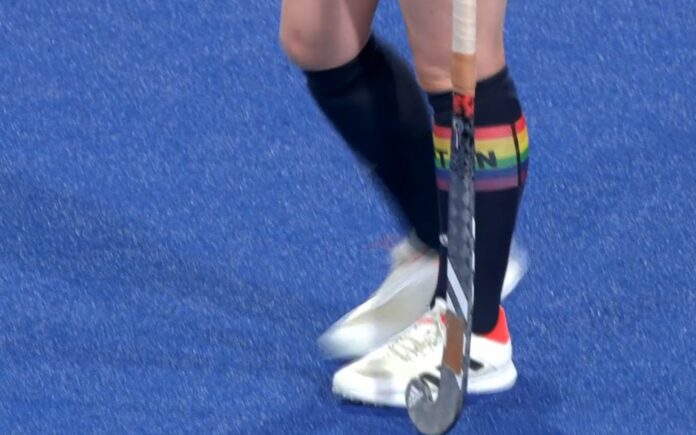 When the International Olympic Committee relaxed their previously rigid stance on political statements to a degree before the Tokyo Olympics, the world opened up too.

Great Britain women’s captain Hollie Pearne-Webb is a prime example, the defender sporting a rainbow armband which she has also worn on her leg in the Japanese heat.

Teammate and midfielder Sarah Evans, the Surbiton skipper and current reserve in Tokyo, had emailed Dr Julie Humphreys days before the Games kicked off once official permission for Pearne-Webb to wear the armband had been given.

Then followed a race against time to equip GB’s leader with the relevant attire.

“Stonewall said there had been a ‘Harry Kane effect’ after the Euros and they were waiting for a new delivery,” Dr Humphreys told The Mirror.

“Gay Pride Shop drew a blank (they’ve had to close down their social because of the level of abuse their staff get – what a dreadful indictment on our society), even my niece, a school teacher in Brighton, got in on the act and was trying to source one.”

She said: “Just as my Olympic torch was dimming, Pierre Gaubert of My G Work contacted me and said his contact in Tokyo could get a rainbow armband to Sarah and Hollie.”

IOC permission followed and the gesture – following on from England football captain Kane and Germany goalkeeper Manuel Neuer wearing a similar armband during Euro 2020 this summer and Germany women’s captain Nike Lorenz in Tokyo – has been invaluable in promoting LGBT+ support nationally and globally.

“What those few days proved to me was the power of networks and contacts,” added Dr Humphreys, who met Evans through the Unlocked programme run by Womens Sports Trust.

“I would never have been able to get the armband to her without the incredible power of the LGBTQ+ world coming together to raise visibility in sport.”