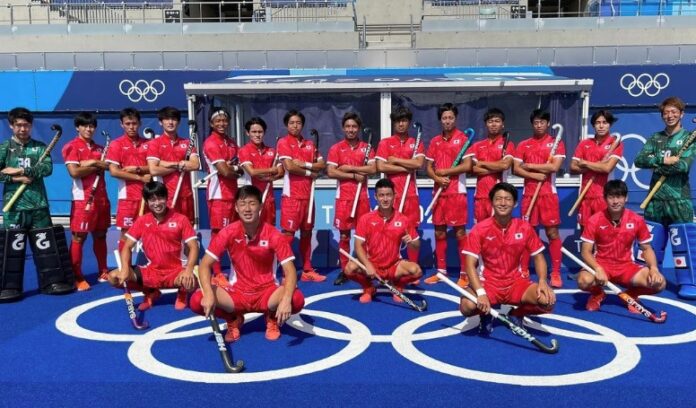 TOKYO — Surely the three points will arrive during these Games for the hosts as Japan men kept their Olympic quarter-final chances alive with a 2-2 draw against New Zealand on Tuesday, writes Richard Bright.

Playing in their first Olympic Games since Mexico City 1968, Japan picked up their first point of the tournament on the back of another superb performance from star forward Tanaka Kenta, who scored a brilliant individual goal and had a shot saved in the final minutes to be denied a winner.

“I’m so upset for him,” Japan coach Siegfried Aikman said of his talisman, who plays for HGC.

“He did everything and at the end he was a bit unlucky (not to score the winner) and now he feels guilty. And he shouldn’t.

“He showed yamato-damashii; akiramenai spirit. He’s a real samurai. I’m proud to be his coach.”

The draw puts Japan fifth in pool A with two matches remaining, against Spain and India.

As far as team performances go, this one was up there with Japan’s opening night showing against Australia where they came back from 2-0 down in the second quarter to lead 3-2 before the Kookaburras prevailed.

“I’m so proud. It gives me goosebumps,” Aikman said of the way Japan are playing at Tokyo 2020.

“I would love to see the guys win the matches. But again we have to deserve it and tomorrow against Spain is another chance.”

World No.1 Australia are top of pool A, adding a 5-2 win over Argentina to their previous two victories.

“Happy with the win. Still think four goals against is too much,” Alexander Hendrickx said after scoring his second hat-trick of the tournament.

“Offensively we played really well. South Africa have quick players and a long high ball, so I think we got caught out a few times. Credit to them that they scored four, but for us, it’s not good enough.”