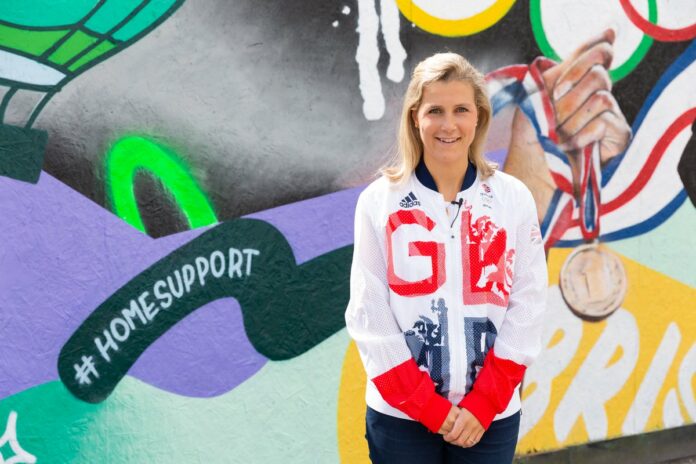 Olympic gold medallist Georgie Twigg has backed a ‘Home Support’ campaign to help inspire the next generation of athletes and help the nation get behind Team GB athletes in Tokyo this summer.

Twigg, who was part of the women’s hockey team who claimed an historic Olympic title at Rio 2016, was back in Bristol, where she studied, to encourage the local population to get behind Team GB with fans not able to attend the Games in Tokyo.

The 30-year-old: “I think it’s so important that the children and local community are involved in this campaign.

“Part of being an athlete and being at the Olympics is to inspire another generation and so to get the grassroots involved in this campaign is absolutely brilliant.

“Having fans in the stadium is really amazing for athletes because you can really feel that 12th man on the pitch, and it can just spur you on and obviously it is disappointing that the home fans aren’t able to travel out to Tokyo this year.

“It was so special for me to have my friends and family out in London and in Rio. Having them supporting me whilst on the pitch and having been part of my journey up until the Olympics, was amazing.

Twigg is working with Purplebricks on their Home Support campaign and unveiled a specially commissioned mural – one of 10 unique walls of art that will be appearing across the country to inspire home support for Team GB – in Bristol.

“This Purplebricks Home Support campaign is so important because, unfortunately, the British public aren’t able to travel out to Tokyo at all.

“It’s been such a challenging eighteen months, for the athletes to know that they’ve got this support back at home in the UK is amazing.”

The Lincolnshire native was joined by local artist Lucy Danielle who created the mural and explained the inspiration behind the artwork.

“It’s all about getting young people and local communities involved in the Olympics, so we contacted schools, and on this particular occasion, it was Summer Hill Academy and St. George.

“We had the young people create artwork and using their artwork and inspiration, I was asked to create a mural based on it.

“I think the Home Support campaign is really important for getting children, young people, adults involved, just to get active and a part of the team spirit.

“The inspiration behind the mural and the design was taken from the artwork that was given to us by the children.

“We used elements of that, along with my style and how I work to bring an element of type colour and a little bit of realism into it.”

Purplebricks is working with communities, athletes, and local artists to create commemorative murals for Team GB, encouraging the nation to show home support and get behind the athletes at the Tokyo Olympics. Visit @PurplebricksUK or www.purplebricks.co.uk/team-gb

Share
Facebook
Twitter
WhatsApp
Linkedin
Print
Previous articleHow Olympic hockey rules and the sport is explained to the uninitiated
Next articleTokyo Olympics: All you need to know about the hockey venue turf