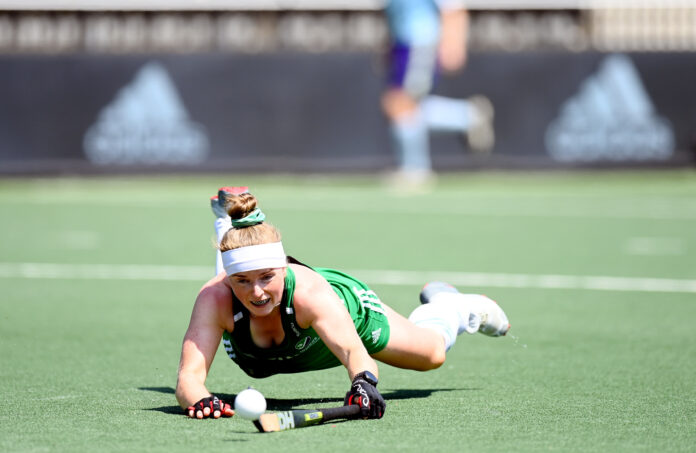 Carroll netted a 46th minute winner to put Ireland within one win of World Cup qualification as her single goal saw off Scotland in Amsterdam.

She batted home her 25th international strike but a first goal since June 3rd 2018 – also against Scotland – before her ACL injury left her on the Green Army sidelines until this year.

Carroll did not recall that previous strike but was suitably thrilled to be back in the mix on this stage and picking up all the points from a tricky battle in the seering heat.

“I thought we started really well, created chances,” was the Cratloe woman’s assessment of the game.

“As long as they held us at 0-0, it does get tougher. You try to stay patient and hope that it will come. But there’s times in the past when it didn’t come. We stayed calm, persevered and got those three points that we were after today.”

Meanwhile, Nikki Evans said the side – with 10 players still in situ – learned enough from that day to see this one out.

She was celebrating her 200th cap, becoming just the sixth woman to do so after Nikki Symmons, Shirley McCay – playing her eighth and final Euros – Cliodhna Sargent, Chloe Watkins and Anna O’Flanagan.

And she was grateful that restrictions had been lifted enough for her to be able to share the moment with her parents in the stands.

“To get one cap for your country is a dream come true. To get 200 with some of my best friends, I am incredibly grateful for the memories and to have my parents here today was really special!

“I was surprised to see them – I am not going to lie. I wasn’t sure of their whearabouts or what their plans were but I could spot them today from a mile away in the Monday morning crowd.”