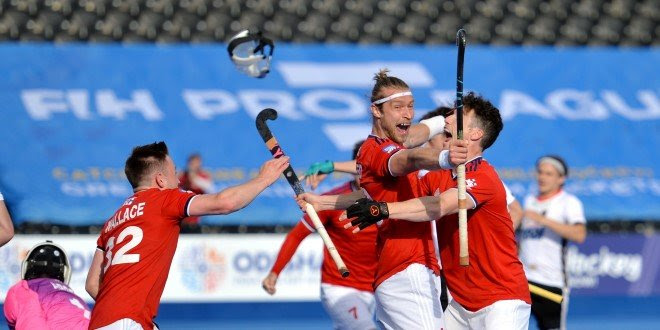 If this rare Test match could be Covid-bottled and sent to Tokyo, then we are in for a treat at the Olympics.

While Germany sent in their young Bundesliga battalion, GB’s men from Bisham weathered the storm. Zach Wallace confirmed his status as one of world hockey’s rising stars, Liam Ansell continues to marvel when breathing down any defence and the hosts looked consistently dangerous at penalty corners. A second FIH Pro League win, their first in four was welcome for Danny Kerry’s side.

Perhaps the madcap tone of this first Lee Valley clash since November 2020 was down to Germany fielding nine players with seven caps or less and their main stars left at home. Perhaps it was down to the novelty factor of playing outside of intra-squad or uncapped matches. Don’t tell that to Brendan Creed, though, who struck his first international goal.

Yet for all the entertainment on show, danger lurks and it starts in defence. Both sides were guilty and surely the second of the double headers will attempt to address the deficiencies at the back.

On the counter, GB were superb and there was only one way forward after confusion in the defence saw Ollie Payne unable to clear and Moritz Rothlander tapping home after 42 seconds.

The east London mob of goals started when Ansell latched on to a Chris Griffiths pass on the edge of the D, blazed through, juggling expertly and and scooping over Mark Appel.

Moments later Sam Ward, returning for the first time at Lee Valley since his head injury, then had his back to goal, swivelled and found Appel’s left post.

From the resulting PC, Creed, GB’s injector, was on Appel’s right post and found himself a swipe away from his first GB goal. Seconds later the jubilant defender was mobbed by team-mates, Creed’s eyes showing signs of joy and disbelief. After an ACL injury had kept him out for so long, the celebration was not muted.

No let up in the second quarter, a video review saw a GB reprieve and Phil Roper opened his shoulders and found the net via a deflection. Both defences were now creaking and for the second time, GB couldn’t clear on the line and Thies Prinz tapped home.

When Griffiths feigned a strike on goal and smothered under Appel for GB’s fourth, the resulting celebration now felt like a training match. Six goals in 22 minutes and with no control from either side, Paul Doesch notched his first goal for Germany with a clean strike from the castle.

Once Harry Martin deflected in via Adam Dixon’s PC hit two minutes after the break, we were looking at a record scoreline between these two rivals. But while the goals dried up in the third quarter, the end-to-end chances continued apace, mixed in with an array of turnover ball and Payne, who played the full 70 minutes, racked up several impressive glove saves.

Somewhat predictably, the fourth quarter failed to find any goals. After 26 shots on goal, 44 circle penetrations in all, who was complaining?