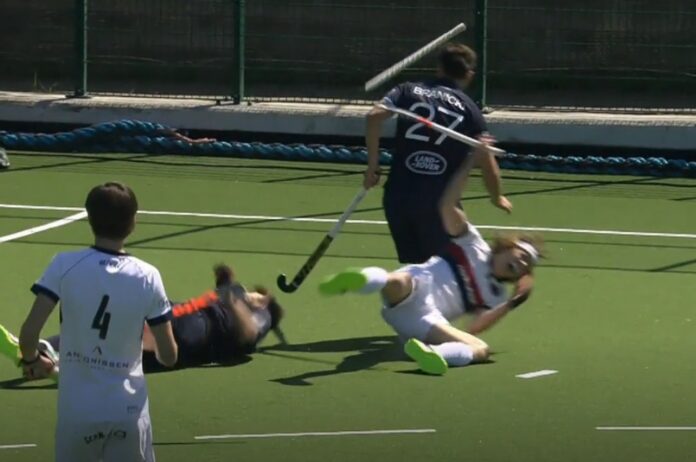 The incident occured when L’Orée’s Stockbroekx went into a three-way tackle with Max Lootens of KHC Dragons. The clash can be viewed here.

The 27-year-old, who joined Orée from Dragons, this season lay motionless for around a minute before medical staff were able to administer concussion protocols.

The game was then held up for over 30 minutes as Stockbroekx was stretchered off and taken to hospital where he also received five stitches to his lip.

Stockbroekx gave a positive update from his hospital bed where he revealed that he could require surgery for the bleeding.

When play resumed Dragons came from 2-1 down to seal a 3-2 win late on. Waterloo Ducks beat Royal Léopold by the same scoreline in their first-leg match.

In Spain, Atlètic Terrassa topped the men’s regular season table to secure a place in Europe next season.

A 5-1 win over CD Terrassa kept them clear of Club de Campo, adding to their EHL Men’s silver medal.

The top four in the Spanish women’s top flight has already been realised. Club de Campo notched their 21st win from 22 leaguue thanks to a 4-3 win over Madrid rivals SPV Complutense.

In Holland, the women’s Hoofdklasse will go down to the wire with Den Bosch – who secured two wins over the weekend – and AH&BC Amsterdam level on points at the top, with SCHC and hdm in third and fourth.

On the men’s side Bloemendaal are already confirmed as table toppers, SV Kampong in second with HC Rotterdam securing third in the play-offs.  Den Bosch are favourites to land the fourth spot.