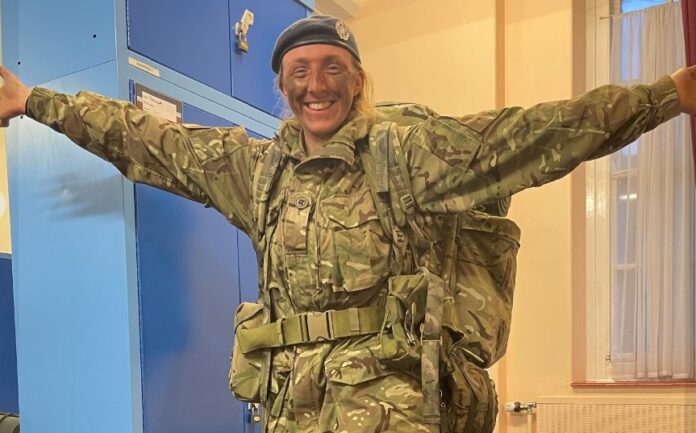 Scotland’s Emily Dark recently put aside her rising hockey career as she finished as top recruit and top shot in her bid to become an RAF reservist and one of the first females in the role.

Dark, who was selected for last autumn’s Pro League trip to Holland and Belgium and is part of the GB development progamme, joined 603 (City of Edinburgh) Squadron to train in the RAF Regiment and excelled in her initial training.

She now moves on to the second part of her training to become the squadron’s first ever female RAF Regiment Gunner, her regiment specialising in force protection, combat tactics, fieldcraft and weaponry.

“There was a lot of interesting theory to learn, alongside drills dressed in uniform and the CBRN suit which made them a lot harder. I’m just thankful there wasn’t too much sun.

“Going on patrol and shooting blanks whilst practicing fire and movement drills was amazing! The range day was brilliant as well, and I can’t wait to spend more time on the range in my Phase 2 training.”

Women were only able to start applying for the role in 2017, meaning Dark will be one of the first females at 603 squadron in the relatively new position.

Dark will be the fifth generation of her family to serve in the RAF. She is currently studying physics at St Andrews University alongside her hockey.