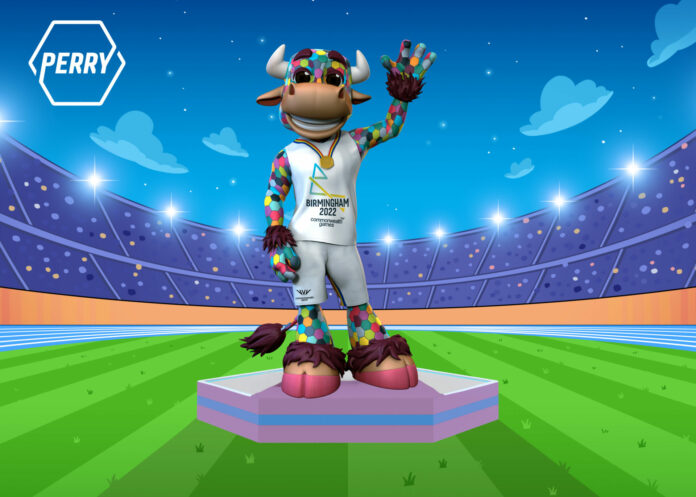 The 2022 Commonwealth Games mascot has been revealed as a bull adorned with a patchwork of multi-coloured hexagons.

Named as Perry – after the Perry Barr area in Birmingham – the 2022 mascot becomes the first at any multi-sport Games who will be brought to life through augmented reality.

It will give fans the opportunity to #PoseWithPerry using their mobile phone camera, and via a special filter on Facebook and Instagram.

Perry is inspired by the design of ten-year-old Emma Lou, the winner of a national design competition that took place last summer.

The competition tasked children aged 5-15 with creating a mascot that reflects the identity, heritage and culture of Birmingham and the West Midlands.

The animal has been synonymous with Birmingham for centuries.

The city has had a market area known as the Bull Ring since the 16th century while the site is close to the current Bullring shopping centre.

Denise Lewis, Commonwealth Games England president, said: “Perry represents the heritage of Birmingham and the West Midlands, as well as what the modern region stands for.

“Perry is right up there with the fantastic mascots I’ve seen during my athletics career, and I can’t wait to see him entertaining the crowds during the Games next year!”

Perry follows Clyde from Glasgow 2014 as the last mascot to feature at a Commonwealth Games held in the UK.

To find out more about Perry, head to www.birmingham2022.com/mascot – including how to #PoseWithPerry using augmented reality on a mobile phone.