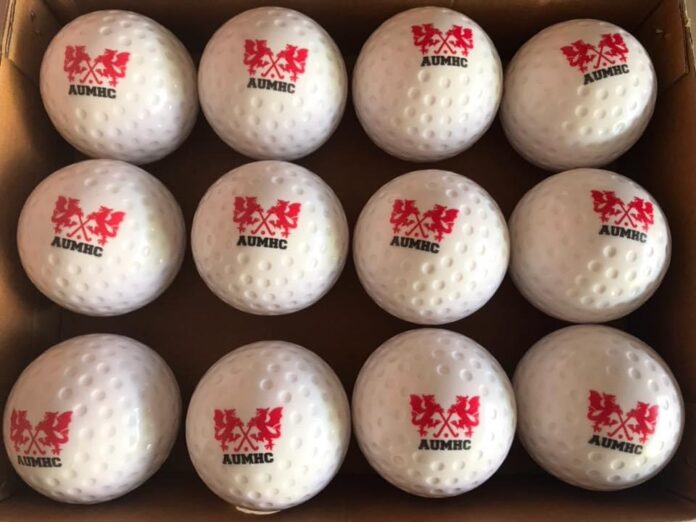 In the 2018/19 season, the club often struggled to field a team, barely scraping together the numbers needed for a fixture. This was a direct result of club losing their astroturf, after it was replaced with a 3G pitch, and having to travel an hour just for their home games. Nevertheless, it has been a very different story over the last two seasons; the club is often praised for its inclusivity and has more than doubled their membership base.

Last season AUMHC remained undefeated, completing the season with over 150 goals, and securing a promotion going into next season. An excellent debut for the team in the local league, and without doubt, a great achievement.

AUMHC have worked closely with the community throughout the year, both through fundraising efforts and encouraging young talent whilst also providing them with opportunities to play in a competitive environment.

Not only has their participation in the league has allowed them to create relationships with clubs from across Wales, which will continue in the future, but they have given school children the opportunity to play in this league. Sharing opportunities and their passion for this sport has positively benefitted the performance and confidence of both members and locals alike.

We have also raised a total of £5,000 for Mind Aberystwyth over the course of the last 18 months and this year the club has also put an emphasis on raising awareness of LGBTQ+ members in sport. The club encouraged members to wear rainbow laces to demonstrate their support of the LGBTQ+ community and worked with Stonewall who work to create inclusive and accepting cultures, ensuring institutions understand and value the huge benefits that they bring.

The club are also continuing to develop and are providing opportunities to their members through umpiring and coaching courses. Many members have attended these courses and gained qualifications over the past year, not only benefiting the club, but supporting other clubs and improving hockey across Mid-Wales. There is an intention to continue with these courses when possible throughout this year with many old and new member showing an increased interest from a range of abilities.

Since the pandemic hit, many of us have not played since hockey for just under a year now. However, we are endeavouring to maintain our fitness when we can individually and link that with the social distanced training which was allowed in November. Although both BUCS and our Saturday league are cancelled until the next academic year, it is important not only for our members physical health but also their mental health in these trying times. Despite the unfortunate situation membership has significantly increased and new members have bought playing kit showing a long-term commitment to the club.

This success of bringing new people to the club, without a proper pitch and throughout a pandemic in which we were not able to meet our members till November, shows the commitment and desire from the committee. They carry this on from the tireless work of the 19/20 committee who were recognised by the Aberystwyth University Students Union and presented with the Club of the Year award, the most coveted and sought-after award the SU can give.

The club hopes to carry on the hard work being put in across the board this year with an emphasis on building it up for a successful year both on the pitch and socially next year.