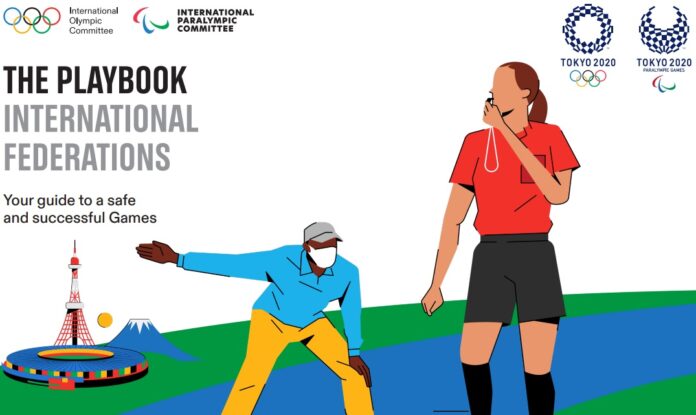 Tokyo Olympic organisers have released a coterie of rules for athletes and officials ahead of the rescheduled Games to quell coronavirus.

The IOC’s pandemic ‘playbook’ rules include a ban on public transport use and wearing masks at all times “except eating or sleeping”.

Olympians will be tested 72 hours before arrival in Japan (and then at least every four days, although there will be no quarantine).

Athletes will not be able to join any spectators, while they will also have to use a smartphone app for contract tracing. Athletes and officials will received their manuals next week.

Meanwhile, singing or chanting at venues is to be discouraged in supporting the athletes, while Olympians will be asked to clap in celebration instead of hugging and high fives.

The playbook – aimed at international federations and officials, with more editions aimed at athletes and the media set for this week – had no specific mention of how spectators would be managed.

Due to the ticketing process, Tokyo organisers have already said that it will decide on an overall spectator limit and restrictions on entering Japan from overseas by this spring.

“Tokyo is the best prepared city we have ever seen,” Christophe Dubi, Olympic Games sports director, said on Wednesday.

“Venues were all completed a while ago and the planning was well in place and extremely detailed at the time we had to postpone the Games.”

The IOC playbook also advised against shopping at the airport upon arriving in Japan.