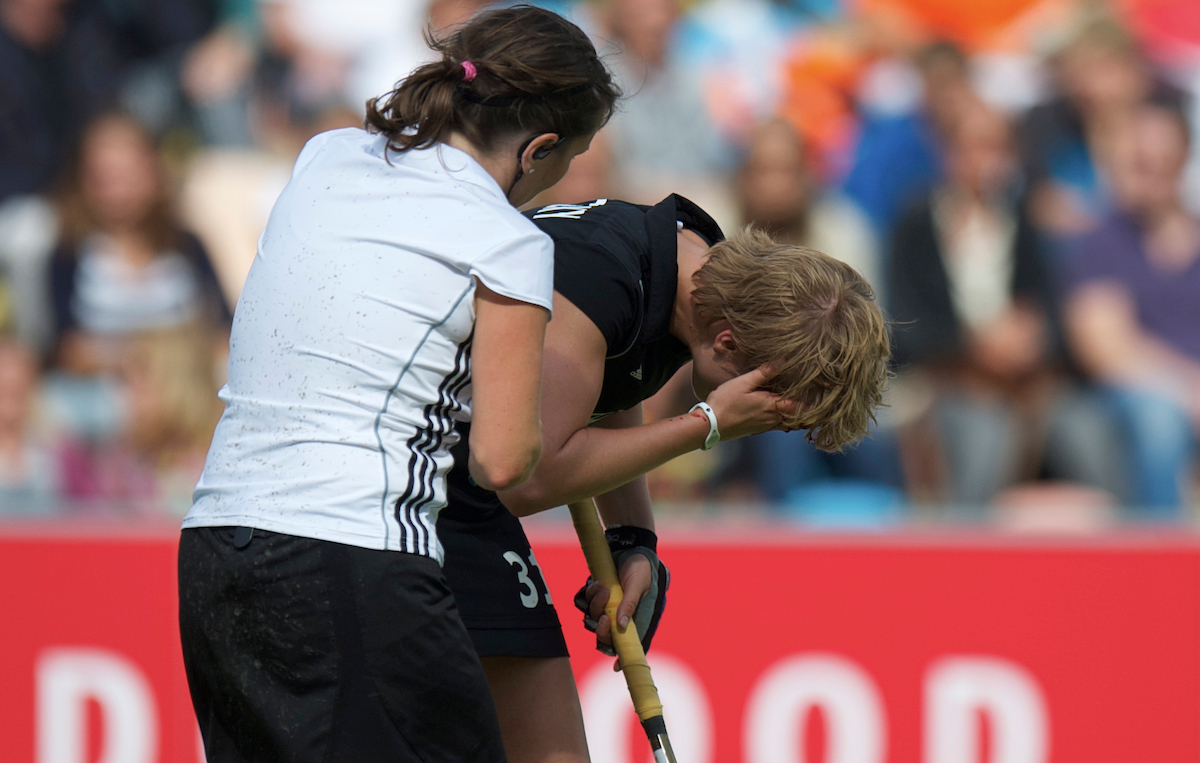 Concussion is the hot topic in hockey. No doubt about it. “It wasn’t like that in the olden days” I hear you say, “we just got on with it”. So are we being over protective? Wrapping our players in cotton wool? The short answer: No, we’re not. Thank you. The End.

So what is concussion?

It has been defined as representing the immediate and transient symptoms of traumatic brain injury (TBI). Well that’s cleared that up then. In reality we don’t fully understand what is happening in the brain during a concussive episode – it’s not something we can see on an x-ray or a scan. Instead, a concussion is identified by recognising the symptoms.

A group of very clever people came together and in 2017 produced the most recent consensus statement on concussion. They define concussion by mechanism and symptoms and this is what the majority of concussion assessment tools used by healthcare professionals are based upon.

As a healthcare professional working in a sporting environment I have access to these assessment tools. If a concussion is suspected, England Hockey have a clear concussion policy that I can follow to ensure that a player is managed safely.

Here’s the thing, though, and I want you to brace yourselves: it’s not only elite hockey players who suffer with concussions. I believe every club in the country has a responsibility to educate its members on the importance of recognising concussion and here’s a good example of why:

In 2011, Peter Robinson received a phone call informing him that his 14 year old son Ben had been knocked out playing rugby and was in hospital. It wasn’t until Peter spoke with the consultant that he realised Ben wasn’t going to survive.

His head injury was likened to that of a car crash. Initially it was thought that the major traumatic brain injury was caused by a single knock however further investigation found that this was not the case.

He had been involved in two other collisions during the game and in the fatal hit suffered what is known as second impact syndrome. This is where a player has not fully recovered from an initial head injury before suffering a second incident which leads to an inability to control swelling to the brain. England hockey, similar to the Rugby Football Union, suggest a simple method to protect players by following the 6 R’s rule:

Sadly the coaches and referees were not aware of this at the time. Had they taken the opportunity to remove him from play, potentially Ben may be alive today. This tragedy isn’t a common occurrence – but it can happen.

So who should take responsibility for this? You. It should definitely be you. Players, coaches, parents, teachers, and not just healthcare professionals all have a role to play in recognising concussion.

Know the signs and symptoms of hockey and above all, as England Hockey recommend, if in doubt, sit them out. You don’t want to be the person making the wrong call that day.

Natalie Turner (MSc) is a lecturer in Sport Rehabilitation at St Mary’s University specialising in pitch side trauma and immediate care in sport. In 2012 she started working for Surbiton men’s 1st squad and is now the lead healthcare professional for both 1st team squads.

Read our Safety in Hockey articles

Hockey Paper staff - February 28, 2021 0
In our latest Club File series, we speak to an administrator who has written a book aiming to help club volunteers