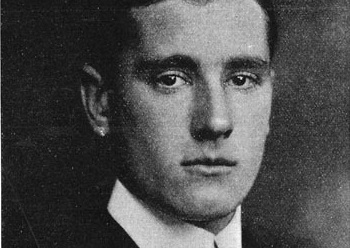 By Mike Haymonds | The Hockey Museum

This is potentially a very subjective claim but can anyone put forward a stronger case than this one for Stanley Howard Shoveller (1881-1959)?

To be the best amongst one’s contemporaries is perhaps the first requirement for this accolade. There cannot be much doubt about that. He played for his school 1st XI – what is now Kingston Grammar School – from the age of 14 and was a prolific goal scorer. He was playing for Hampstead Hockey Club before he left school and for Middlesex the year after.

Three years later (1902) at the age of 21, which was very young in those days, he first played for England. In the following 19 years he played 35 times for England, for a decade as captain. He also fought in World War One, rising to the rank of Captain in the Rifle Brigade and being awarded a Military Cross.

His international career spanned two Olympics, 12 years apart, London 1908 and Antwerp 1920, winning gold medals in both – in Antwerp when approaching his 40th year. He remains the only Briton to win two Olympic hockey gold medals. In London he was the tournament’s second highest scorer (seven goals) and in Antwerp the top scorer with 12 of GB’s 17 goals, including eight in the final 12-1 win over Belgium.

That in itself is an achievement unlikely to be equalled again by a British player. His official England record shows that he scored 79 goals in 35 appearances, including 17 hat tricks, an average of more than 2 goals per match.

It is possible that this tally could be posthumously increased as “Shove” as he was affectionately known, captained the England team that played in an International Tournament in Hamburg in 1912 as a substitute for there being no hockey at the Stockholm Olympics. At this event he scored four times against Germany and three against Austria but at present these two matches do not appear in the England records.

To make Shoveller’s record even more remarkable he did not play in 23 England matches because his work as a stockbroker did not give him the freedom to do so. What an amazing record it might have been had he played in all the 60 matches of his era.

In his obituary in The Times he was described as “having an impeccable style that ensured that he had fewer ‘off’ days than most players. He was fast, with excellent ball control and had a first-class shot at goal. In addition to this he had a most deceptive body swerve that made him difficult to mark. He was the ideal model for any aspirant to copy.”

No wonder he was called the W G Grace (the celebrated cricketer) of his time and therefore must qualify him to be the greatest English hockey player.