Alex Danson: ‘I always felt a real license to compete when I stepped on the field’

It was funny, one of the messages I had when I announced my retirement was from David Ralph [GB women’s assistant coach] who said ‘I’m glad I won’t ever have to umpire squads again!’ I suppose my tenacity on the pitch comes from having an older brother growing up, with a younger sister. I’ve just always felt a real license to compete when I stepped on the field. That’s the place. I would never run into anyone and challenge for anything down the street. But if there is a 50-50 ball there is license to go. The wave of competiveness was okay. It’s completely different from my life away from the field and I always enjoyed that.

My first England coach Trisha Heberle used to write handwritten letters to use with her feedback. She used to tell us that representing England wasn’t enough. That was instilled in me at a young age. I got that as a 16-year-old, that being here wasn’t a short journey. It was a long journey and we need to be better. She used to count down days until tournaments and it taught me the value of every day, every session and every decision you make is important. She gave me my first opportunity and that environment gave me the best start in hockey.

NOT ALWAYS ABOUT TALENT

I was at school when I joined the England programme. Others had jobs and were training at 5am. The big part of why I’ve enjoyed my career is that I’ve learned how to train well and hard, look after my body and to make good decisions. I learnt the best lesson as a 14-year-old going for England under-16s selection. We did a bleep test and I got 10.1. I was devastated, scrawny and wasn’t very strong. My hockey wasn’t great either.

I remember going home from Lilleshall at the end of the week and telling mum that they hadn’t made any cuts but had invited everyone back in six weeks. I think I must have woken up my parents every morning. They would cycle and I would run. I had by far the biggest improvement six weeks later. As a young athlete, it’s not always the most talented that are picked, but the hard grafters. I said to the coach ‘you can teach me all the skills, but I will work harder’. It’s the ethic behind working hard.

BE COMMITTED AS A FORWARD

There wasn’t really a strength and conditioning guidance as there is now. I just ran. My 16-year-old self then wouldn’t get onto the programme now as physically I wouldn’t be up to it. I don’t think there has been a 16-year-old since, because of the central programme. The game has changed. There was no self-pass rule and it wasn’t as quick when I started. The set up is different and the game has developed. 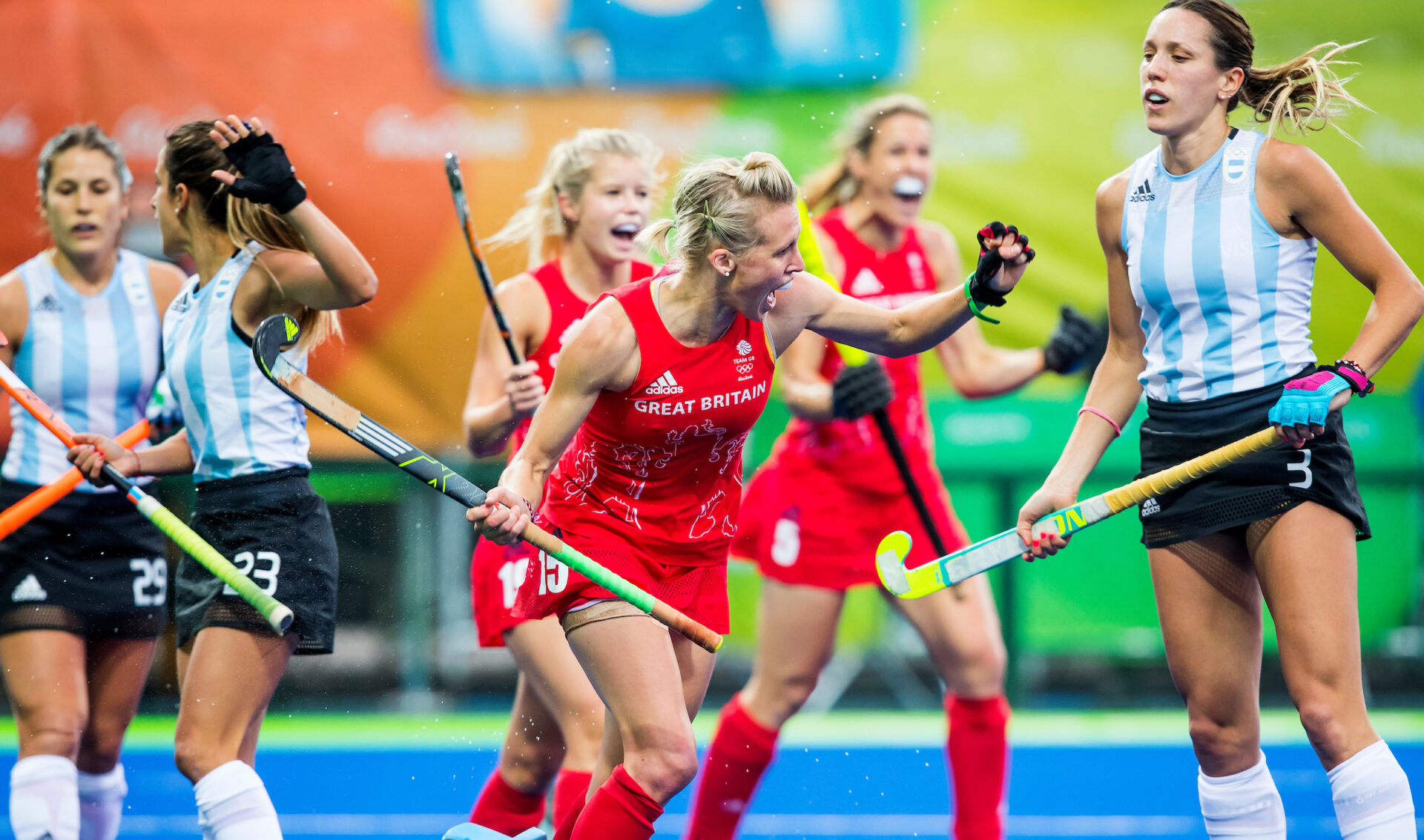 I spent most of my childhood in front of a goal. I didn’t have any fear as a forward. I almost trained that out of me. I learnt that the safest way was to be 100 per cent committed to something. The minute you hesitate or think too much you weren’t safe. My game evolved and adapted over time. As I got more comfortable on the ball, I dropped further into midfield, but my skill sets were better up front. If a youngster is looking on, I would say it’s about not being afraid of having a go on goal, putting yourself about in the circle or afraid to take a hit.

FUNDING WAS A GAME CHANGER

In my Gap Year I worked in a Harvester Restaurant. I would train in the morning and do different shift patterns. I then worked as a hockey coach for three years. In 2007, the team was split where half the team trained at Bisham and Loughborough. Funds weren’t great and there was talk of being a centralised programme.

We imagined what it would be like to play hockey as your job. Without question, funding was our game changer. In 2009, we started to understand what a culture was, how we wanted to form it and to have complete ownership of when we trained. You can’t do that on thin air. These were young women believing it was the right thing to do and making the decision to move their lives. It could have easily not happened if there was more resistance. Without doubt I don’t think we would have medalled in London without it.

The World Cup in 2014 was torturous. Every day didn’t get better. It was a hard period in time. No one was in a good place and there was lots of inner conflict. We needed to hit rock bottom as a squad to reform and we had failed coming 11th at a World Cup. There was pride but there was also expectation, especially being funded. Andrea Furst, our sports psychologist, supported us and designed and created a new set of values which would become our bedrock over the next few years. We now had a different set of learning circumstances.

The power of being together can work both ways. If you look at how to work effectively and understand your role in a team, have a common purpose, it can go the other way and be the best thing you’ve ever done. I remember our first game against Australia in Rio. We were leading 1-0 and the whistle went for half-time. We ran past the Australians as one team. It wasn’t an accident. It was designed for us to feel together. I loved the challenge of that.

Things could have been so different in London. We didn’t play as well as we needed to do in those first two games. That’s why what we did in Valencia for Olympic qualifying (world ranked 7, winning seven in a row) and Rio (winning eight in a row) was so incredible. I don’t think we were under-prepared or if the occasion had an impact. There was so much change in the pools and there wasn’t as much certainty as in the tournaments where we were successful. It was, however, the most incredible World Cup.

The face of hockey has changed enormously because of it. The stadiums were filled, I wish we had finished further and I didn’t know it would be my last game (losing to Holland). But I still look back with really fond memories. We had suspicions about Danny [Kerry, potentially moving to the men] and who wasn’t talking about it in hockey? It was unfortunate but we didn’t know until after the tournament. That’s sport: coaches move and change. I remember when he did tell us I was disappointed as he is a very good coach. It is just the nature of the game.

I never thought how it would feel. I asumed it would be pretty rubbish but it was a lovely day and overwhelming. I was amazed that so many people took the time. It was so nice to hear from team-mates and it has instantly connected me to people. Players from other countries, that meant a lot to me. We play the same game and do the same thing. I didn’t know what to expect.

I got caught out in one of my retirement interviews. I was asked for my top three moments when I didn’t say Rio. You have to be careful. It’s not that it isn’t the pinnacle of winning anything, but it’s the other moments which were defining in terms of us getting there. I didn’t want to be disrespectful in what we had achieved! After all, there were so many people involved in the Rio programme.