‘Never give up. If you are good at something, follow your peers and carry on’ 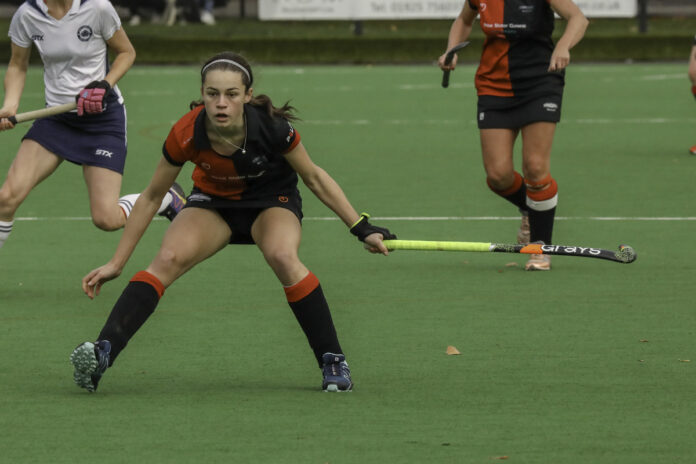 Here’s a disparity. Maddie Goodman, one of Bowdon Hightown’s young cohort of hockey players, lives on the same road as Manchester City FC player Tommy Doyle. Both have played for England NAGS in their respective sports, their lives are contrasted as top flight players.

Goodman attends Sandbach High School and has time for just one training session with Bowdon. The forward and talented runner has faced adversity in her short career to date and clearly accepts her path as strives to reach the top.

Moving from Oxfordshire to Cheshire, Goodman first watched her sister play for her local club Triton 2s. She was soon playing and then for the rest of the season. “That’s where I saw the physical side,” she declares.

“But someone must have put a complaint in as I was 11 at the time. They stopped me playing when I was 12 and when I turned 13 I could play Cheshire League again.”

Two seasons later she was voted the league’s player of the year, aged 14. A keen rugby player around the same time, she was also banned from playing against the boys, with club coaches saying that it was getting too physical. “I had to stop completely and that was surprising. I could have played for a women’s team in Manchester for rugby but I wasn’t really committed at that time.”

Hockey took over. “I was at that age when I didn’t know I wanted to play hockey like I am now, with England and Bowdon 1s,” she says. “I knew I would be a sporty person, that I would have that one sport I could be good at or love when I was older.”

After moving on from Triton and a spell playing for Bowdon 2s, Goodman was happy to bide her time. “I just wanted to play a higher level and be surrounded by people who knew what they were talking about,” she continues. “Now I’ve got experts telling me what to do. It’s been a big jump from Triton but I’m loving it.”

For a 17-year-old, it has certainly been a learning curve and she is in a good position to offer fellow juniors some words of advice.

She says: “A message I would send would be to not let it faze you and that you will face challenges and how you deal with them is what will make you a better person. If you are good at something, follow your peers and just carry on.”

Changes to the England system meant that she faced a tough selection wait to make the trimmed England under-18 squad. She just missed out but was asked for training last December.

She is set to attend university in September and hopes to play Premier Division hockey alongside. She says: “I’m looking for someone who does my course and someone who does hockey at a very high level. I’m looking to continue hockey at the highest level I can and however far it goes I will go.”

State school pupils can play high level hockey providing they develop other skills from playing a range of sport. Maddie didn’t have the hockey experience and skills of other teenagers who have accessed fantastic resources and coaching in private schools, but she’s developed other strengths, such as speed and balance through athletics club and participation in cricket and rugby. Coupled with good access to grass roots hockey, it’s possible to do well.
Nicola Goodman

Share
Facebook
Twitter
WhatsApp
Linkedin
Print
Previous articleTikTok hails Sam Ward’s creativity as nation gets on board
Next articleField Hockey Betting: Here is what you should know