Oh to be young members of HC Olympia, the burgeoning hockey club which usually has the pitch at Wilrijkse Plein Sports Centre, home to the 2019 EuroHockey Championships, all to itself.

There were 450 members and rising last summer. The only hockey club in central Antwerp, its genesis arrived in 2016 when Hockey Belgium was awarded last summer’s brilliant Championships.

And after this riveting tournament, how many more storylines will there be for a nation fast turning into a hockey superpower? And will there be an Olympia member lining up as a Red Lion or Panther in a decade, we wonder?

For the lucky kids were surely telling their own favourite moments of the Euros with their sticks on the same pitch; when they relived the defensive artistry of Arthur van Doren, the corner power of Alexander Hendrickx or chest-thumping emotion of Victor Wegnez when the stands were unbolted and club matches resumed at the beginning of the season. For the rest of us, the memories of this match are firmly etched.

This was the championships where Belgium men further placed themselves into the pantheon of sporting greats. For those inside the stadium when Belgium beat Germany in the semi-finals, the last throes of this classic match will be retold for a generation. 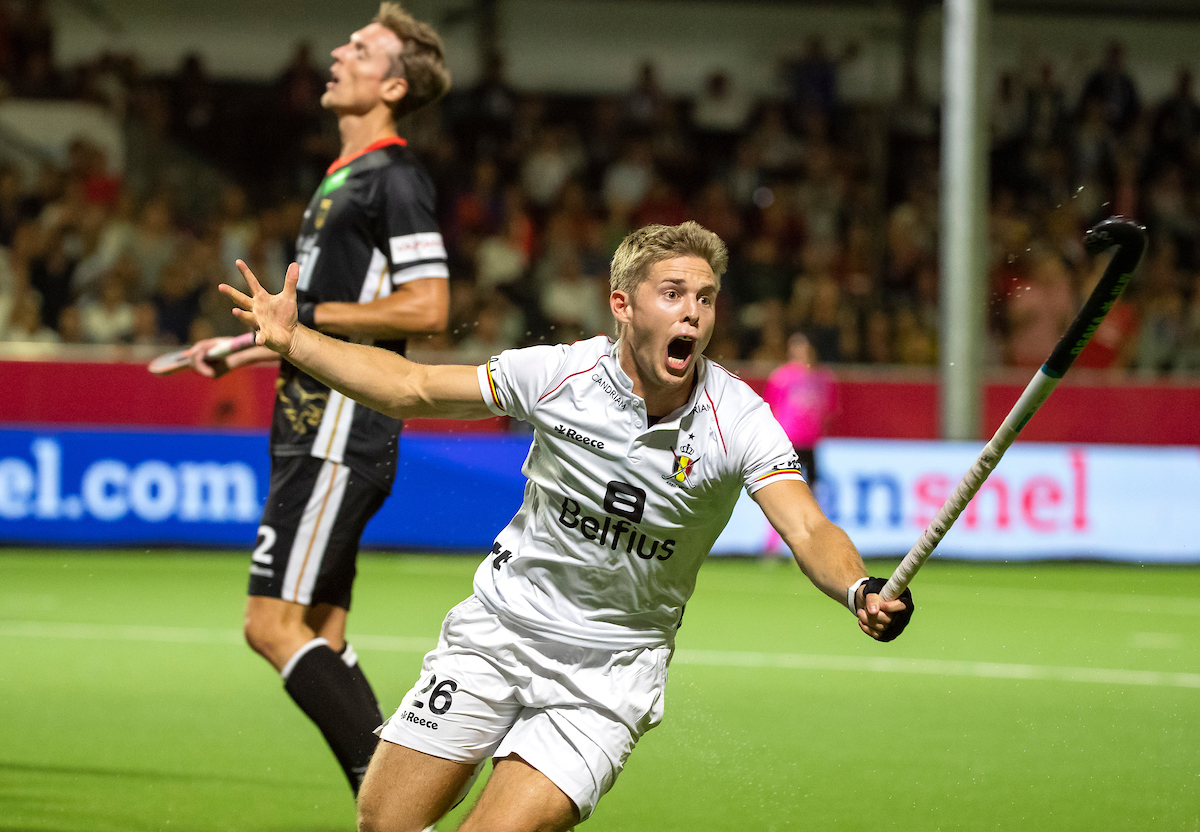 The Hockey Paper spoke to coaches, commentators, journalists and players and they were united in their assessment; that the semi-final was the best match they had possibly ever watched.

Belgium’s world and European titles had been four years in the making. In 2015, Kiwi coach Shane McLeod set about changing man-to-man tactics, enforcing a zonal press which encouraged the opposition to keep retention in midfield pockets, while the Lions pressed to dispossess.

It helped that team-mates knew each other’s role implicitly, a majority having played with each other through the junior ranks. Belgium ruled the roost in Bhubaneswar and on home soil cast aside teams with unerring belief.

At 2-0 down in the Euros semi-final, little needed to be said by McLeod, but for making sure that 50-50 battles were won in midfield. The rest would take care of itself. Belgium scored four goals in the last 18 minutes, three in the last six during a period of play in which few will forget. Nor the final score: 4-2 for the record.

But it was so much more than the searing comeback. The crowd that night was in hockey ecstasy. The players responded and carved through Germany, by now becoming increasingly fatigued thanks to their early man-to-man marking.

The lone drummer and the voices of the Red Tribe support added dimension, while pockets of football-style chanting paved the way for one of the most extraordinary hockey atmospheres possible. To think that Germany were a glancing glove away from likely going 3-0 up until Vincent Vanasch, the world’s best goalkeeper, turned into Europe’s best illegal trap spotter and a video referral saved Belgium from a penalty stroke.

The crowd jeered Germany and then roared Belgium on. Tom Boon and Nicolas De Kerpel pulled goals back before Wegnez seized the moment with a wonderful backhand strike which rocketed through a crowded defence to the back post netting. 3-2. No turning back for Belgium.

The final against Spain was a formality. Belgium harassed the streetwise Spanish and their counter-attacking play paved the way for a goal blitz before half-time. From midfield to baseline, Belgium were incisive, mesmeric and dominant in the simplicity of their play. They had started the tournament with a 5-0 win over Spain and finished it with the same score, in the same manner.

Played out hours before a day which heralded one of the great sporting moments when English cricketer Ben Stokes blazed to all parts, as Headingley ‘81 turned into Headingley 2019. so Belgium men put themselves into their own category. No doubt there will be some Antwerp locals who couldn’t get one of the 7,000 tickets for the semi-final epic.

In time, tall tales may well be told from those who weren’t there who will regale as if they were.

Such was the euphoria in the fans’ village afterwards, when the players left the stage crowd surfing across their adoring fans one by one. That was Antwerp 2019.

The EHF is replaying the whole tournament here