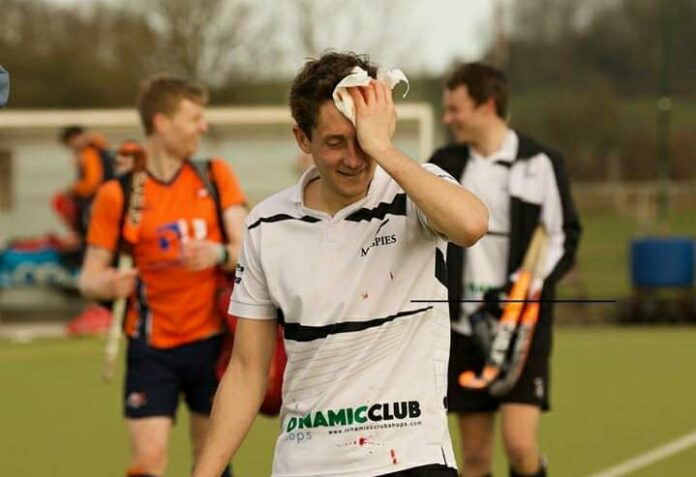 Former Great Britain player Tim Whiteman says he is on the road to recovery one year after suffering a mild traumatic brain injury while playing hockey.

Whiteman received a blow to his left eye when the ball deflected up his stick in the final match of last season playing for boyhood club Harleston Magpies as the club returned to the national league.

Whiteman, who won 54 international caps and is player/coach at Harleston, returned to work the following week before post-concussion syndrome took hold.

“The first few months were hell,” he revealed in a social media post.

“I seemed to make little to no progress, spending 23 hours a day in the house.”

In strikingly similar detail to the injuries sustained by Alex Danson, Nicola White and Shona McCallin, Whiteman says that his confidence and self-esteem “took a hit” while he experienced constant fatige and issues with light and noise.

He said it took three months before improvements were made and he was able to return to work as a politics and history teacher after six months, albeit slowly.

Incredibly enjoyable season with the @Magpies_Hockey men. Delighted the group's commitment and hard work has been rewarded with national league next season. Thanks to super manager Kevin Ridley and the wider club for their support #magpiesfamily #gomagpies pic.twitter.com/iph17gRMsm

At Christmas, his confidence began to return but admitted that he still needed to spend two hours per day “with my eyes closed or sitting in silence listening to podcasts”.

Whiteman, who made his England debut in 2014 and played in that year’s World Cup, believes he will now make a full recovery and has set himself a challenge of exercising and pushing his heart rate up.

The Hockey Paper wishes him well in his continued recovery.