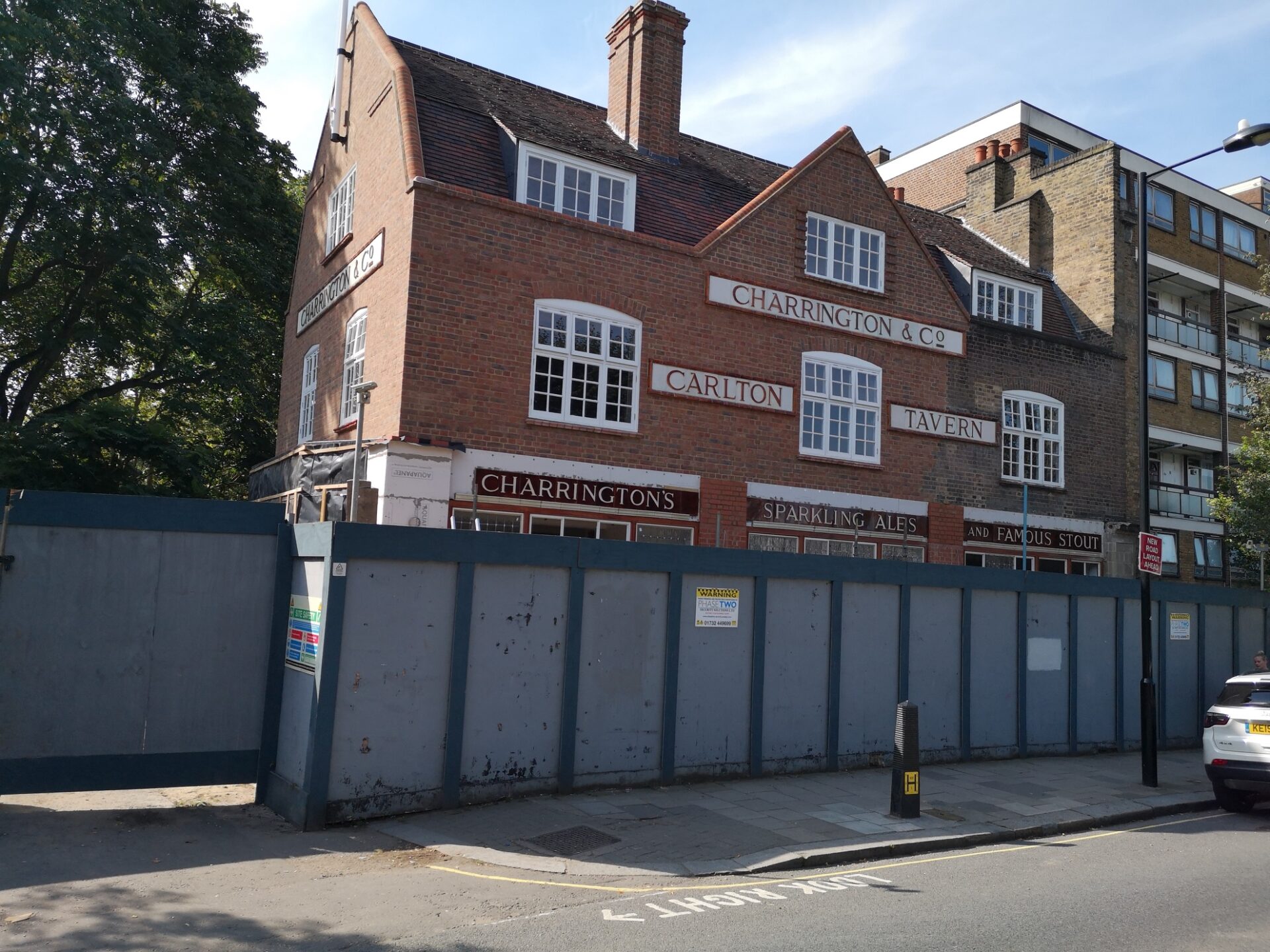 By The History Museum’s Mike Haymonds

Many London area hockey people will remember with affection the home that Hampstead & Westminster HC created for themselves in an old pub adjacent to their playing pitches in Paddington. It came as a great surprise to everyone, not least Hampstead when the pub was suddenly demolished in a much publicised act of “commercial vandalism”.

On the pretext of a stock take, the owners of the Carlton Tavern asked staff to stay at home on 8 April 2014. The landlord, who lived on the premises, was given 15 minutes to vacate before contractors moved in with a bulldozer and began to demolish the building. No warnings had been given and apart from a few traffic cones in the road there were no traffic control measures and no site hoardings. It all happened so fast none of the contents were removed. The pub was fully furnished including wall mounted TV screens and beer in the cellar. Maybe this was an easy way to stock take!

Three club members initially took on the lease as Peter began to retire. Many of the club’s possessions were stored in the pub, as is normal with a clubhouse. However everything was lost as tons of rubble rained down on everything inside the building. This included goalkeeping and other club kit as well as much cherished club trophies and memorabilia, all destroyed in an instant.

The developer’s planning application for demolition to provide for a new pub, with 10 flats above, had been refused by Westminster City Council, going against planning officers’ advice. It was expected that the Tavern would be protected by designation as an Asset of Community Value. Historic England had carried out an evaluation. These would thwart redevelopment it was hoped.

First reports of the demolition reached Westminster City Council at 1.00pm. When officials arrived at the scene, all that was left was a side wall and part of the front elevation. An immediate court injunction was obtained to stop further work. The developers had taken a risk. Reportedly, they expected a fine for breaches of health and safety requirements, along with approval of their redevelopment proposals, now the building was no longer. The demolition made news headlines that day and was later covered in a Channel 4 TV documentary.

However, as the building was to be recommended for listing, a planning enforcement notice was issued. The council demanded that the pub be rebuilt as a facsimile of the original premises (that is, rebuilding brick by brick). The developer appealed and after a five-day planning Inquiry, the council’s decision was upheld. The developer later challenged the brick by brick requirement but as detailed photographs had been taken earlier as part of the listing investigation and parts of the original construction were still visible, this was held to be legally enforceable.

Locally, there was considerable scepticism that the rebuilding would be carried out. However gradually scaffolding appeared to shore up the remainder of the building and a hoarding was erected. Then work on the external parts began. A banner was erected, proclaiming that the Carlton Tavern would be “coming back soon”. Progress was still slow and the deadline for completion of the work passed.

In October 2017, the developer submitted a further planning application to include three flats within the pub when rebuilt. This was rejected, it went against the decision of the planning inquiry.

There are reports that the internal features of the pub are also now being re-created. Locals admit that the project might well be completed, against all the odds. The pub might well be returned to community use but it is still for sale. Hampstead & Westminster HC will need to decide whether they want to return and, if so, how?

There had been a pub on the site of the Carlton Tavern for well over a century and ironically the original pub was also illegally demolished, but that time by German bombing. However unusually, it was during WW1, a war that is not usually associated with bombing raids. It was on the night of the 19 May 1918 when a German Gotha bomber managed a direct hit with a 300kg bomb, which demolished the pub and killed the landlord and his young son.

So, for the third time the Carlton Tavern could appear on the London scene and let us hope that, in an era when many pubs are closing, the “new” Carlton Tavern will prosper and will again provide a home for Hampstead & Westminster HC.

This originally appeared in a previous Hockey Paper edition