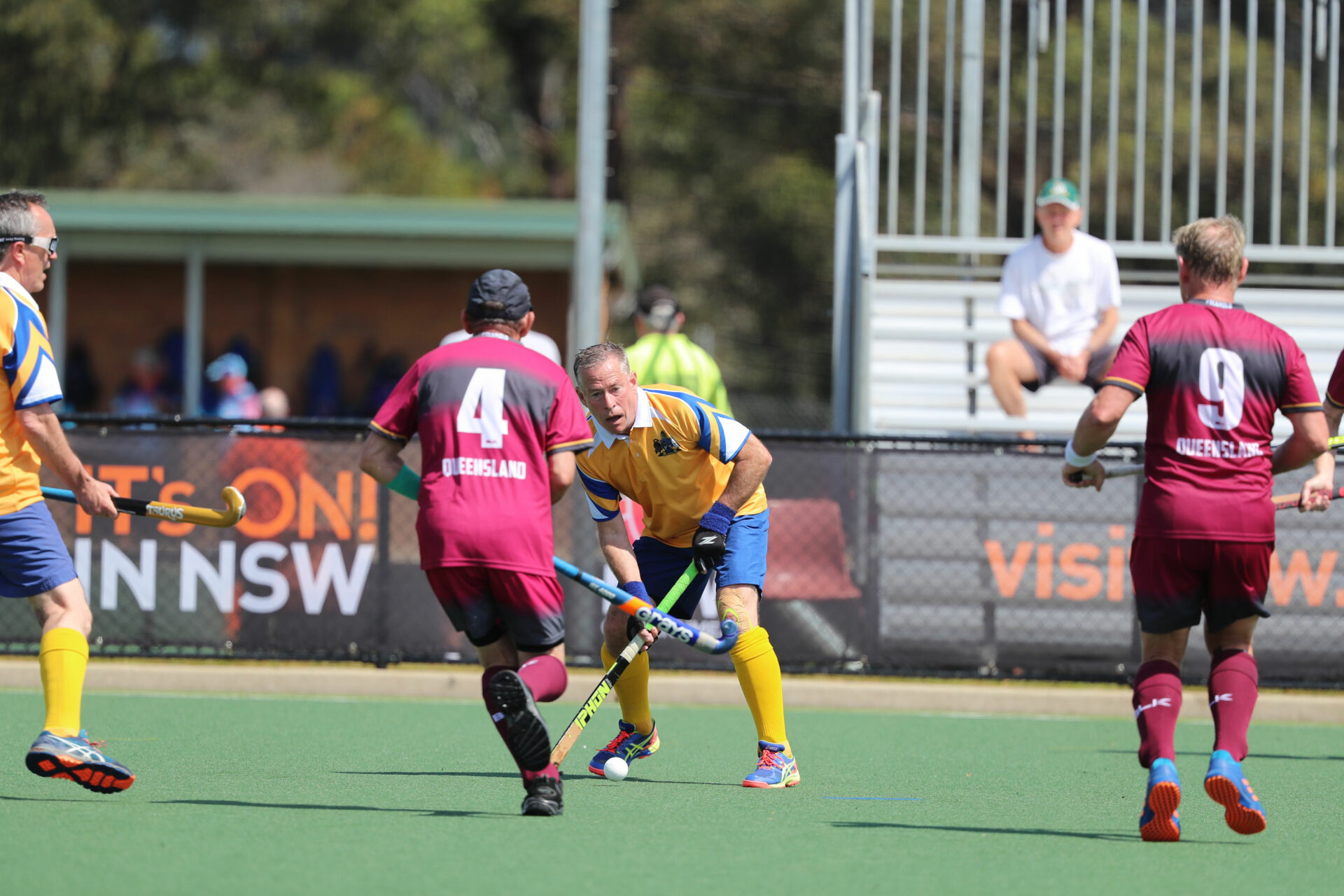 If you had told me in 2015 that I would be playing a gold medal game in Europe and scoring twice against Germany in an international tournament, a World Cup, I would have laughed at you. Playing is one aspect but, in truth, it was at this tournament that one of the best things about Masters hockey, beyond the ability to travel to interesting places, occurred.

After our round match against the Spanish TT team, I overheard a member of the Sixtiberians team telling my team-mate he was actually a Kiwi, but a resident in Spain, who had lived in Australia a long time ago and played with Old Canberrans in 1984. I jumped in to the conversation and said: ‘So you’re Juicy’, the nickname for Roger as he once had a temp job working for a fruit juice company. Indeed it was him and so, after 34 years, we caught up again and remain in touch. This is the power of Masters hockey.

A JOURNEYMAN CAREER
I started hockey from the age of 10 in 1966, after we emigrated from the UK in 1965, to my mother’s home town in Queensland, Australia. My grade 4 class teacher at North Ipswich Primary School, Mr Goodridge, was the school’s hockey coach and we won the junior divisional premiership that year and I kept playing.

I started playing under-12s with the Woden Hockey club in Canberra’s inner south, switched to a university club in 1975 playing second grade before playing with another two first grade clubs, Daramalan and Old Canberrans.
I stopped playing in 1988 when I went back to university to do a masters degree in sports science. My career was on the up and with family, work and study commitments, something had to go! I never reached any great heights as a player during this period, being a ‘journeyman’ player, capable but not at that next level for higher honours. While I enjoyed the camaraderie of the sport and playing, I didn’t devote a lot of time to improving my skills.

COMEBACKS AND OVERCOMING CANCER
Attempting a comeback to hockey in 1991, I suffered a fractured cheekbone followed by torn ankle ligaments and so gave the game away. I remained involved in umpiring and I progressed further in the indoor game, before moving on to the role of umpire manager coach at nationals for another six years. 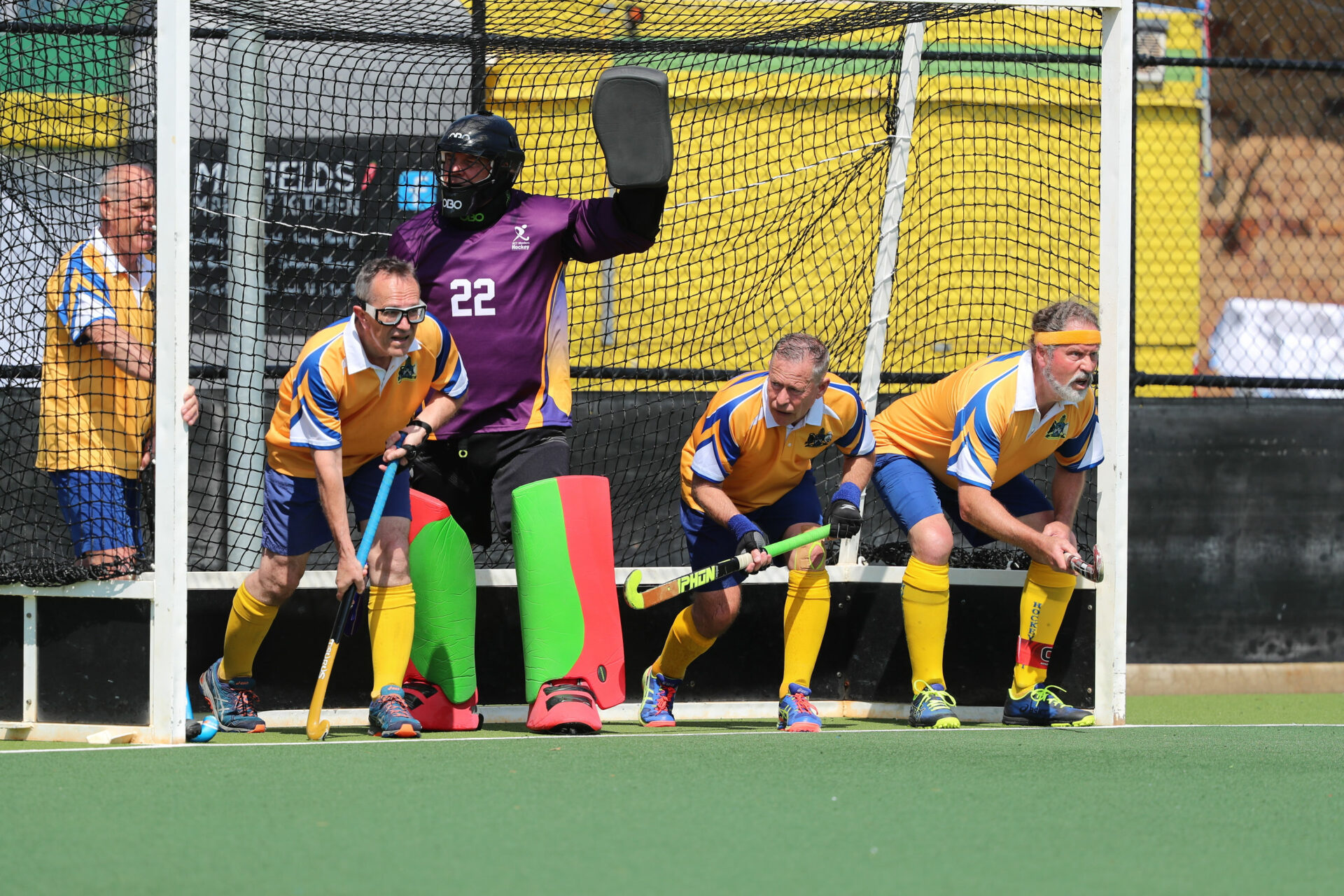 During the period from 1995 onward I started learning the bagpipes, eventually becoming pipe major of the band and playing in Moscow, Adelaide and Edinburgh. I then had to overcome prostate cancer and subsequent surgery in 2014 before I decided to reconnect with local hockey association in Canberra.

With Monday evening socials, I realised I still had some skills and decided to work on my fitness, relearn old skills and new ones, and see what progress I might make. It’s been some journey!

Three years ago, I was selected for the Australian Capital Territory (ACT) over-60s team at the Australian national championships in Adelaide, playing in the forwards. We finished fifth in Division 1 and to my surprise I was picked by my team-mates as best player for the tournament.

Coming out of this tournament I was selected to play for Southern Cross Masters Hockey Strongly encouraged I decided to work harder and see where I might go. Luckily former Kookaburra Glenn Turner lives close to Canberra and has a gym business at our main hockey centre, so I started a gym programme under Glenn and having him to chat to about aspirations and his experience has been a fantastic resource.

WORLD CUP DREAMS
I was again selected for the ACT over-60s team last year and again I was picked as team best player for the tournament. I had played strongly and while I was told selectors were looking at me, I did not get a national call-up. The same happened at an indoor challenge.

Another outing with Southern Cross in Antwerp saw us win bronze while I was selected as shadow reserve for the Australian over-60s team for the Masters World Cup in Tokyo next November. I’m getting closer to a call up.

So, after almost 25 years away from the game, in the last four years since re-engaging, I’ve played in three international tournaments, for two bronze and one gold medal, and a fourth tournament is 12 months away. After rekindling my love for the game I am working hard still, with gym and running sessions each week, playing at every opportunity and honing old and new skills. I have a goal to make the green and gold. Or for that matter, cheekily, Ireland, as I am dual citizen!

Regardless if I do or don’t achieve full national selection, Masters hockey has reconnected me with a sport I love, provided unforgettable travel experiences, reconnected me with old friends and with many new friends. As people get older they tend to drop out of things, but I have found that the friendships and opportunities that Masters hockey provides, means that I look forward to the challenge of the next 12 months working towards Tokyo. There’s no better feeling.

The Hockey Paper covers masters hockey in every edition