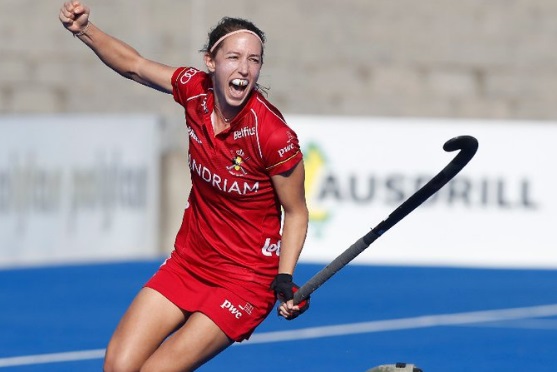 The Kookaburras and Hockeyroos had their Australia Day celebrations soured on Sunday at Sydney’s Olympic Park.

The Kookaburras suffered a 4-2 loss to new world No 1 Belgium while, for the second time in successive days in the FIH Pro League, Australia and Belgium’s women needed a shoot-out to decide the destination of the bonus point, with the Red Panthers avenging Saturday’s loss in the one-on-ones with a 3-1 victory.

In a match that saw delays thanks to high temperatures and a thunderstorm, the Hockeyroos had to wait until the end of the third quarter before Gabi Nance put the hosts ahead, deflecting home after a period of Australian dominance.

However, the Belgians hit back early in the fourth quarter thanks to Tiphaine Duquesne’s fierce penalty corner strike to tie the match at 1-1 and force a shoot-out. Louise Versavel, Duquesne and Barbara Nelen all converted in the one-on-ones, giving the Belgians a fine result against their higher-ranked opponents.

Having taken top ranking from their opponents thanks to a shoot-out bonus point earned on Saturday, Belgium men came into Sunday’s second meeting knowing that a positive result for the hosts would put the Kookaburras back at the top of the rankings.

However, a 4-2 win ensured that the Red Lions took five points from a possible six against the current Pro League champions.

Alexander Hendrickx put Belgium into a 2-0 lead before a cracking backhand strike from Australia’s Lachlan Sharp reduced the deficit.

A fine deflection into the roof of the net from Maxime Plennevaux put Belgium 3-1 up with four minutes remaining, forcing Australia to go for broke and replace their goalkeeper with an outfield player. That tactic backfired when a rapid Belgian breakaway allowed Emmanuel Stockbroekx to slap into an unguarded net before Jeremy Hayward bagged a final minute consolation penalty corner goal for the Kookaburras.

There’s no doubting that the sport is in need for the Pro League to survive and thrive. Six months of top hockey is a boost for hockey, but there is still no sign of a major sponsor, despite the FIH admitting to The Hockey Paper last month was close to being inked. The sight of poor crowds at Sydney was another low point, despite Australia hockey being a continued success on the global scene.

The men’s result means Australia start the 2020 edition with one point from the opening two matches, the same position they began their 2019 title-winning campaign. Coming off a three-week preparation, it was always going to be a difficult proposition for Australia coming up against the European powerhouse midway through their season.

Seriously @HockeyAustralia if you can’t get the crowds for #FIHproleague in the most populous city then it’s time to think regional!

Far better to have 2k and a packed, partisan house than swathes of empty seats.

Do it for the game!#bigboldpackedloud #hockey #GrowTheGame

Australia co-captain Eddie Ockenden said: “We were in the game a lot today and it was a close match, but we need to play a bit better and that will come in the next few weeks. That’s the great thing about the Pro League, we play the best teams in the world, twice, every year and that is fantastic. To play a great team in our first two games has been awesome for us to learn and get better.”

Australia host Great Britain this weekend in a men’s and women’s double header.

Rod Gilmour - February 25, 2021 0
Her 'street' art may be adorned on a Somerset barn wall, but Lily Webb's depiction of two British stars shows that hockey...