An England cricketer crediting hockey for their rise in red and white ball cricket? It has been an all-too-familiar theme in the last few years.

First, Jos Buttler came to the fore, while Ollie Pope is the latest talent to emerge with a hockey background to match.

Pope, 22, is currently playing with England out in South Africa as the Old Cranleighan continues to forge his second coming after he made his Test debut at Lord’s in 2018 during a brief foray on the international scene.

After a County Championship-winning season with Surrey, the future looked bright for an Ashes call-up this summer before he sustained a lengthy shoulder injury earlier last year.

Now it's time for a bowl…

On his return, his averages were excellent and he has battled back into the England squad with the same tenacity he showed on the hockey fields at Cranleigh School.

“He was a very good all-rounder, he got involved in all after school activities,” said Cranleigh’s Steve Batchelor, the 1988 Olympian. “You have to have the right head to succeed. Ollie is very grounded and he got a lot of support from staff and mates.”

Batchelor says that Pope had superb spatial awareness, while his hockey helped him to progress at the Twenty20 format in cricket as well as a specialist against spin bowling. 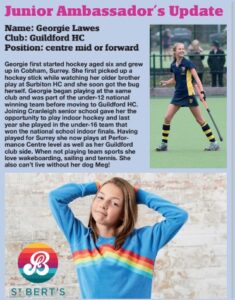 “To be honest, cricket and hockey come hand in hand, probably more so in Twenty20 than any other format,” Pope said in an interview last year.

“I’ve found myself seeing a gap behind me and asking ‘what can I do to get the ball there?’ In hockey, it might be the same kind of action to make a deflection. I made a name for myself at the start with Surrey by playing these wacky shots, getting the ball into a weird position.”

In Year 13, he wasn’t allowed to play football due to his Surrey contract terms and so he returned to hockey with the school.

Pope, who apparently hails his best sport as golf, was a technically gifted hockey defender, a good tackler who was able to get “stuck in” to matches.

Buttler, Somerset captain Tom Abell, a former England under-16 player, Tom Banton, the England Twenty20 batsman, and Pope are now the cricketer names to have all played good standard hockey.

And it’s likely that this quartet won’t be the last to have been a success at school level without going into the elite English hockey system. Who knows, if Pope had played earlier than 13, he may well now have gone into the pathway system.

Meanwhile, Cranleigh have another talented sportsman with the same attributes. Tom Lawes is being touted as the next student to follow in Pope’s footsteps, given his equal footing in hockey and cricket. And Tom’s sister, Georgie, one of The Hockey Paper’s junior ambassadors (above left), is another future prospect in both sports.

It seems in recent years, however, that it’s been hockey’s loss and cricket’s gain.

This article has been adapted from our November print edition