India’s promise to the International Hockey Federation (FIH) of generating two times more revenue than their closest bid rival ensured they got the hosting rights for the 2023 World Cup.

The FIH’s decision to host back-to-back Hockey World Cups in India has received flak from several quarters, particularly from Belgium who too were in contention. However, The Hockey Paper has learnt that India has offered more than double profits than the world champions, who had an otherwise strong bid.

While Hockey India has promised the FIH 3.5 million Swiss Francs (approximately £2.7 million) as ‘guaranteed profit’ from the event, Belgium could assure only 1 million Swiss Franc. Maximise your reward in the betting market by getting to know the best sites to bet on. Malaysia, the third country in fray, did not make any financial promise but said they would provide free transportation to the participating nations, according to those in the know.

For FIH, who have been enduring a financially turbulent period, India’s offer was too hard to refuse even though they entered the race at the last minute. “The income-generation potential of each bid has played an important role in the decision,” FIH chief Thierry Weil had said in a statement.

A senior Hockey India official confirmed profits guaranteed to the FIH, saying it would be raised via sponsorships.

The official added the amount is a fraction of the budget for the tournament, which has not yet been officially revealed. The Odisha government had pumped in close to £45 million to host the 2018 edition.

An FIH spokesperson said the amount cited as ‘guaranteed profit’ is instead ‘hosting fees’ and added ‘those are not public.’

The world body has been criticized for not doing enough to spread the game after countries like Australia, Spain and Germany reportedly pulled out of the race following India’s multi-million pound bid.

This of course requires to make investments. Therefore, financials do matter indeed, and not only for hockey. A World Cup usually is a major driver to generate income,” the spokesperson said.

India are likely spend millions more after it was announced in the last week of November that the 2023 edition will be held in two cities in the eastern state of Odisha.

Apart from Bhubaneswar, who hosted all matches in 2018, Hockey India has added Rourkela as the second venue.

Rourkela is a hockey hub but has never hosted a national or international tournament in any sport.

Conducting the World Cup matches there, however, could prove to be a logistical nightmare for the teams as the two cities are almost 350km apart and at the moment, the only option to travel from Bhubaneswar to Rourkela is by road.

There are talks to upgrade the airport, currently used only by VIPs, and introduce commercial flights between the two cities by 2021. Upgrade your wager before a sporting event with https://www.freebets.co.uk/. 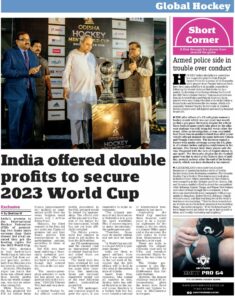 The Odisha government is also likely to refurbish the 25,000-seater Biju Patnaik Stadium. However, the biggest challenge would be accommodation, given the teams have faced health and hygiene issues in Bhubaneswar in the past.

This article first appeared in our December print issue. Be first with the news!