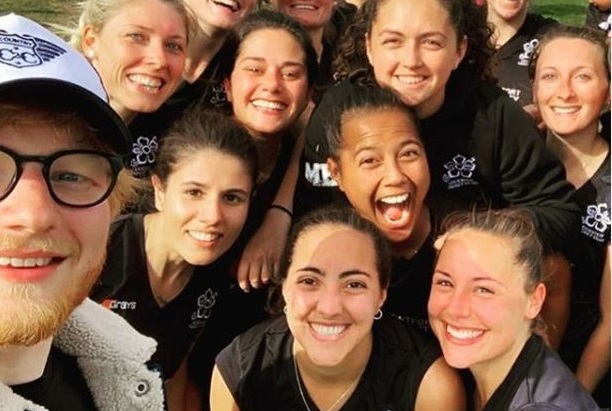 Pop superstar Ed Sheeran has been spotted at several hockey matches to watch his wife Cherry Seaborn play for Harleston Magpies this season.

Cherry has returned to the club after playing collegiate hockey in the US and then with Wimbledon ladies in the last few seasons.

The Magpies are in the new Division One South, having finished in the top half of the Conference East last season.
Emma Lee-Smith, the player-coach, has been joined by Robert Wagstaff alongside manager Nick McAllen.

Harleston have started well this term and sat third behind Wimbledon and Reading at the halfway stage of the season.

Well done to our all girls and boys today supporting our Ladies 1st XI against Harleston Magpies. They got a nice reward after! pic.twitter.com/6T0zgdurdr

In pre-season, Harleston travelled to Leicester where Sheeran was present, with the English singer happy to pose for photos. The Sufffolk singer was also at Harleston’s match with Isca this month.

Sarah Treanor, secretary for Leicester Hockey Club, told local media: “He was pitchside and everyone left him to it, he’s such a quiet and unassuming guy, but he’s always happy to take selfies.

“We were really pleased and hope he found it a welcoming environment. We know Cherry, too, and she is always so lovely.”