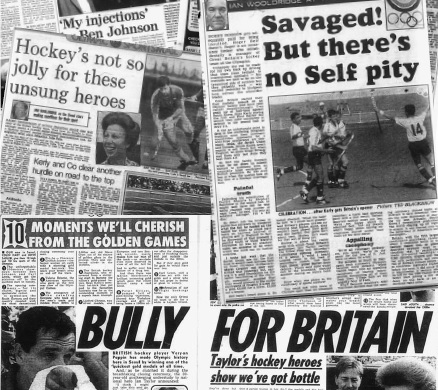 Seoul Glow tells the story of the Great Britain men’s hockey team who won gold at the 1988 Seoul Olympics.

Little to the team’s knowledge, the final caught the British public’s imagination, a journey which also inspired the famous TV commentary ‘Where were the Germans? But, frankly, who cares?’

Victory, for a team of amateurs, who had either quit their jobs or taken holiday to play in Seoul, propelled the team to celebratory heights on their return to British shores.

The story, written by Hockey Paper editor Rod Gilmour, also reveals how the team was led by the late Roger Self, the inspirational manager who gelled his players into Olympic title holders.

While stocks last, purchase Seoul Glow for £9.99, including P&P.

Pay by PayPal or pay by debit/credit card as a guest.

Please note: We have sold out of copies signed by three Olympians. Author-signed only. Purchases made after December 13 will receive in early January.

Book extract – I turned my hockey stick and shinned Roger Self