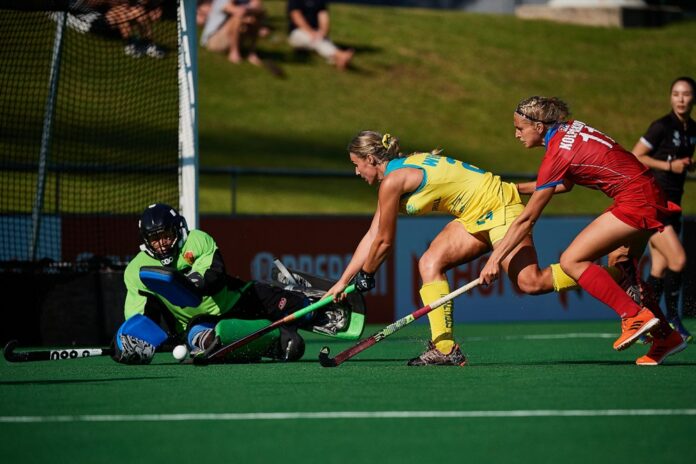 Hockeyroos coach Paul Gaudoin had hoped the Friday heat would play into Australia’s hands, while co-captain Emily Chalker admitted she didn’t know Russia had a team after years in the programme.

Well, Russian proved a match for Australia, who in the end carved out a 4-2 victory in Perth for a two-goal cushion heading into the Olympic qualifying second leg on Saturday. But for brief patches, it looked far from easy for the hosts.

Australia had made it 2-0 in the opening two minutes as Chalker and Amy Lawton made hay before Russia pulled one back six minutes later.

They then equalised in the third quarter when Alina Khalimova scored from a PC.

However any tension among the Hockeyroos fans only lasted a minute as Stewart trapped, turned and smashed the ball in to seize back control.

Chalker then sealed the result in the final quarter after a scramble in the Russian goal as she was on the spot to tuck the ball away next to the right post.

A reverse shot from Mariah Williams went inches away from adding a fifth in the 53rd minute, the Hockeyroos needing to be content with a 4-2 victory.

Meanwhile, Belgium scored early and late to earn a 2-0 win in China.

Jill Boon scored in the second minute before Stephanie Vanden Borre secured the win a minute from time.