Hampstead & Westminster, Holcombe and Surbiton open up with wins 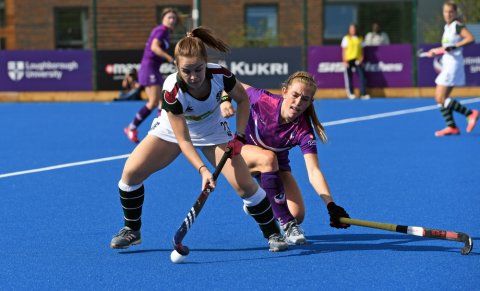 Newly-promoted Hampstead & Westminster put in a fine debut performance in the top flight as they beat Beeston 4-1 in their season curtain-raiser in the Investec Women’s Premier Division.

Kate Richardson-Walsh’s side bolstered their squad with some strong seasons, including GB’s Grace Balsdon who opened the scoring with a sixth minute PC on Saturday.

Sarah Robertson put H&W 2-0 up before Rosy Stephens cut the deficit just before half-time. Robertson doubled her tally in the 43rd minute before Joyce Esser added another only two minutes later as the London-based side went top of the table.

Georgie Twigg, thanks to a superb overhead volley, and Alice Sharp scored in the first quarter and all signs pointed to a heavy win.

But two quick goals from debutante Izzy Petter and Beth Peers got Loughborough back on level terms at half time. Emily Defroand’s 40th minute goal then saw Surbiton hold on.

Meanwhile, Holcombe, beaten to the title for the past three years, opened up with a slender 1-0 win over East Grinstead thanks to Lorna Cruickshank’s debut goal via a PC.

Buckingham may not have strengthened significantly in the summer but last year’s play-offs have served notice of their capabilities. And a 4-2 win over Clifton underlined that on Saturday.

The University of Birmingham drew 2-2 with Bowdon Hightown, who have now played in the top flight for the last 30 seasons after we made light up of the fact that the women’s league was celebrating its 30th anniversary this year.