Since January, Great Britain’s men and women have playing home and away in the inaugural year of the FIH Pro League. A ground-breaking, new, global hockey competition that sees the greatest hockey nations battle it out for glory. Bringing a new format designed to get the very highest entertainment out of international hockey, each fixture is guaranteed a winner with any draws being dramatically settled by a shootout to decide which team is awarded a bonus point.

Great Britain Hockey is always looking to push our sport forward and it is excited about to be hosting a thrilling conclusion to their campaign with the final home games set to be played at the Twickenham Stoop Stadium, home of Harlequins. Following on from the Vitality Hockey Women’s World Cup which was witnessed by 125,000 people last summer, Great Britain Hockey wants to continue to grow hockey as a spectator sport. The ability to put a hockey pitch down in a bigger stadium is part of that process, and is a game-changing moment for the sport as other nations are looking at how they may replicate this move.

This announcement marks another hugely positive step forward for international hockey in this country. Last summer, the Vitality Hockey Women’s World Cup in London, making it the biggest standalone women’s sporting event of the year. With BT Sport long-term partners of the sport, youth participation up 80 per cent since London 2012, and the GB women’s team the current Olympic champions, hockey continues to go from strength to strength. 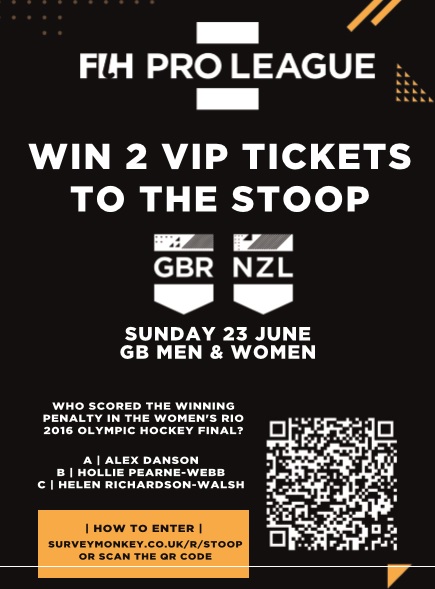 Speaking to the FIH, David Ellis, Harlequins’ Chief Executive, said: “We are delighted to be supporting Great Britain Hockey to bring their sport to a wider audience here in South West London. Our Club has a history of innovation and adventure and we take great pride in being able to offer our neighbours and supporters the chance to see something different at The Stoop. Hockey supporters from all over the country are welcome at our home and can look forward to enjoying a day to remember here in June.”

Using ground-breaking new technology, a temporary surface is currently being installed at the Stoop in order to bring hockey to this top class stadium. It is an exciting venture as hockey makes history with the Stoop pitch surface to use an Olympic standard turf system that will feature at the Tokyo 2020 Games.

The innovations being trialled for this historic Stoop fixture not only require finding new ways to lay the hockey surface, but also the facility to lift it again after a short window of time. This will allow surface to be re-used time and time again and ensure that as well as ensure that the grass pitch is ready for the Harlequins’ upcoming season.

As well as being the home of Harlequins, The Stoop has hosted numerous other fixtures over the years including the 2010 Women’s Rugby World Cup Final, regular England Women’s rugby matches and was once home to the London Broncos rugby league team.

Hockey will now add itself to the sporting history of the Twickenham venue as we close our FIH Pro League campaign at The Stoop, for what promises to be an incredible day out. Tickets are still available from the Great Britain Hockey website, should you wish to be part of this historic occasion.

Join the Pride at cheer on your national team at The Stoop. Tickets for June 23 GB v New Zealand are still available.

This article is run in partnership with England Hockey