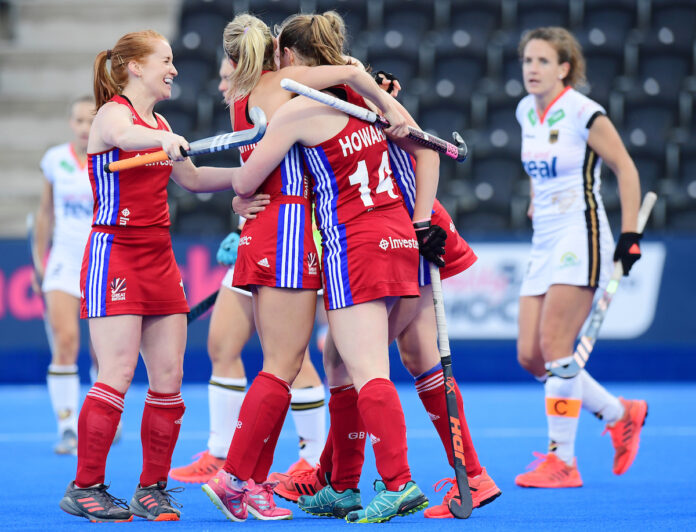 There were teenage kicks on show at Lee Valley but Great Britain’s senior players will be kicking themselves for the way they handed Germany a 4-3 win with a goal 18 seconds from the end of play on Friday night.

Ultimately, this agonising defeat went the same way as the men’s side defeat to Germany 24 hours earlier. However, Mark Hager’s side still find themselves languishing at the lower end of the Pro League table with the watching Hockeyroos to come on Sunday.

GB had opened up a 2-0 lead thanks to a Tess Howard double before Germany levelled. Esme Burge, the 19-year-old playing her debut, then combined brilliantly with 18-year-old Izzy Petter, who scored her first senior goal to hand GB a 3-2 lead.

But two goals in the last six minutes, including in-form Charlotte Stapenhorst’s late strike from a goalmouth melee, left GB bemused at the final hooter in Maddie Hinch’s first game back to international duties.

With GB still missing Lily Owsley with a groin injury, it was an unmarked Howard who pounced at the second attempt to give GB the lead in the 10th minute.

It was a signficant goal, their first goal in the first quarter in 13 matches and the opening Pro League game in February.

Howard could barely believe her luck early in the second quarter. Germany uncharacteristically lost the ball in their circle, Hannah Martin picked up and her pass found Howard’s deflected stick.

Germany’s chance came in the second quarter from an attack on the left flank which saw Amelie Wortmann have enough lift on her shot to deny a diving Hinch.

Great Britain were struggling to make their lead count in the third quarter and when Germany advanced into the final third and defenders unable to make in impact, Nike Lorenz followed up a shot which came back off Hinch’s post. GB’s attempt to refer came to no avail.

With the rain lashing down, Sarah Evans won a PC for GB but Ansley’s fierce high strike found the post. It was entertaining fare now. And with nine minutes left, Burge weaved into the circle, rounded two Germans and laid back to Petter, who calmly slotted home.

But GB couldn’t hold on to their lead once again as a loose central ball into the circle saw the defence again unable to clear and Leena Micheel flicked home from a tight angle.

Ansley’s penalty flick had too much height with four minutes remaining and with the crowd urging GB forward, it was Germany who had the final say, GB’s defence unable to clear.

Still, this match was a marked difference on GB’s defeat to Germany in April. Both sides have improved since then – and that can only bode well for Hager.

Don’t miss our Stoop special out on June 17. Subscribe by June 10 to receive your copy!