No longer do those Hampstead & Westminster supporters resplendent in their old touring jackets need cast their minds back to 1991.

On a March day 28 years ago, H&W played old rivals Surbiton in the London League at Reed’s School. For the winners, there was automatic promotion to the National League up for grabs.

H&W hit the post when a goal to the good in that match and Surbiton subsequently scored. It was the point they wanted to go up, with H&W needing to win. Surbiton have got the better of H&W ever since when its mattered most, but the north Londoners’ title success finally cast aside these narrow misses. 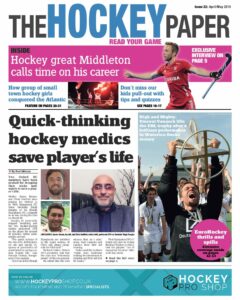 Between 2001 and 2016 in the top flight, H&W finished between fifth and ninth, where they once staved off relegation in 2008. But the club has revelled being the third longest participant in the Premier Division after Reading and Surbiton.

And the Lee Valley triumph would no doubt have been doubly emotional for Toby Roche, the club’s longest-serving captain post-War, who has prevailed through the lean years, as well as serving under five coaches.

As H&W president, the late Peter Boizot often spoke of a European League in the early 1980s and how the club ought to aim to participate.

For many at the club, this seemed a fanciful idea with their London League status. That is until the appointment of New South Wales’ Greg Carr as coach.

It was a decision prompted by Boizot and the 1990s saw a steady climb. Promotion to the top flight began in haste at the turn of the century – including the club’s first play-offs in 2004 under Hockey Paper columnist Todd Williams. And now, 15 years on, they can finally make plans for Europe, where once it was just the dream of Boizot.

Sorry … You can only read so far online! Take out a Hockey Paper subscription for 32 pages of regular hockey!