Both men’s and women’s teams had never won at the Perth Hockey Stadium in GB colours and Australia duly carried on that tradition as the Kookaburras won 2-0 before the Hockeyroos prevailed 3-0 in front of over 4,500 supporters.

Both GB sides can count themselves unlucky given their ball possession and attacking intent, but the hosts were too clinical in the final third.

The impressive Trent Mitton opened the scoring for the Kookaburras in the 13th minute before Jacob Anderson, who also produced a fine performance, struck 10 minutes later. Why not try out the best bets at betbrain.co.uk.

Zach Wallace looked a lively presence for GB all afternoon, while Alan Forsyth went close on several occasions. It summed up GB’s afternoon, plenty of openings with little to show for it. 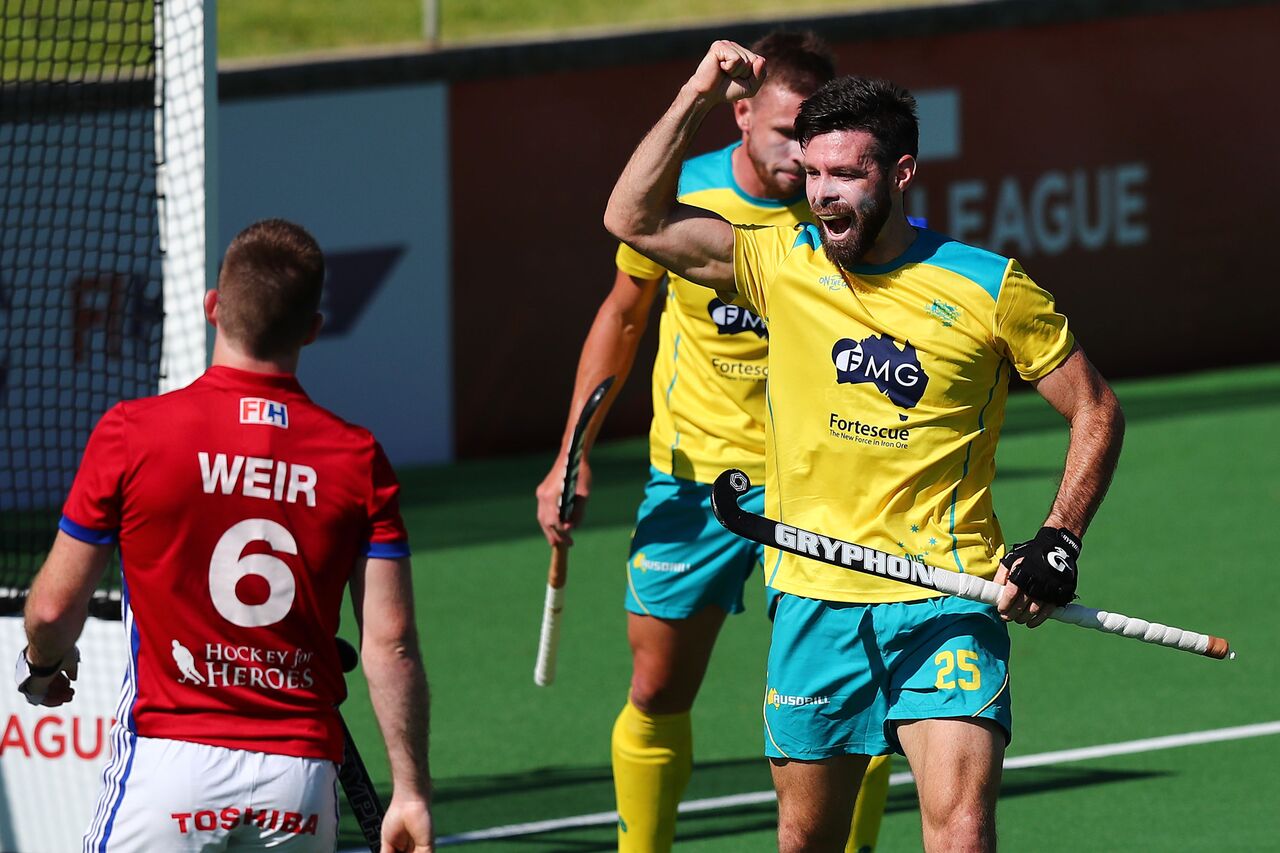 In the women’s clash, two first-half goals also did for GB as Kalindi Commerford and Mariah Williams, one of the stand out performers of the evening, handed Australia the initiative.

A Williams counter in the final quarter finished with Savannah Fitzpatrick firing low with 10 minutes left to leave GB bottom of the Pro League table heading to China next Saturday.

However GB are hopeful of kick starting their campaign with new coach Mark Hager joining the squad on their Oceania leg and a bid to stem the tide of goals at the back.

“There are massive steps from the last game and there are things to work on in the final third,” said captain Hollie Pearne-Webb.

She added that there were already differences under Hager “so look out for us in the next few months.”

GB men are next in action in April with an away trip to Argentina.

It’s a double job well done for Australia. The Hockeyroos ease to a 3-0 win, as GB women’s winless start continues. They can count themselves unlucky given their ball retention, but Australia were clinical in the circle and on the attack. The Perth hoodoo continues, too. Neither GB men or women has still to win at the home of Australia hockey. Thanks for joining us! Finally, a word.. From next month, we’ll have less exclusive stories on web and more in print. Find out more:

2 – Sarah Jones opens up space in the D but her shot is punched clear.

5 – Quick stick work by Pearne-Webb. GB retain the high press but the move ends with a deflected shot wide. Then, Owsley, still full of running, but she ends with a huge swing and a miss and ends on her back – with a smile. Not going GB’s way today.

11 – GOAL! Wonder work by Kaitlin Nobbs. She intercepts, breaks with Hockeyroo numbers. Tennant is again fast out of her goal, but with an overload Savannah Fitzpatrick strikes low and the backboard thuds. 3-0.

12: Australia steal the ball on their own 23m line. They break through Williams, she passes to Malone who is hurried thanks to the fast-running Tennant. Great chance to seal the points.

5: As Ric Charlesworth says on comms, it’s been scrappy the last five minutes. GB are taking the game to the Hockeyroos. Martin slips as she attempts a shot free in the circle. Owsley also in the mix. Lynch looks up to the task today.

8: More bright play from GB, starting from the back Ansley, Petty and Martin involved but Squibb does well. Then, a deflected shot goes wide. Possession play from GB this quarter. Hockeyroos defence tight on their own patch.

11: Lily Owsley has been really forceful tonight and signs are she could really up her game another level under Hager.

12: The great Pro League comeback needs to rear its head for GB women here. No GB side, men or women, has won in Perth and the midfield that Gaudoin has set up here is ruling the roost this evening. Bright start for GB in Q3.

HT: That’s Australia’s opening half. They end with a PC and the deflection is saved well by Cochrane. Lively half though.

2 – GB handing the Hockeyroos some cheap turnover ball. They can break though, through Rayer, with GB three on two but the ball breaks down.

4 – Penny Squibb, a school teacher, and Hannah Martin clash and the Briton goes down after what looks like a stick to her head. The Hockeyroo just shakes her head. No love lost.

GOAL! GB caught in defence. There are Hockeyroos free and in space, defence is lapse and Mariah Williams slaps home brilliantly. All too easy.

8 – A good direct run by Malone and Emily Chalker goes close to 2-0. Australia finding their way feet thanks to the opening goal.

10 – Rosie Malone gets one in the forehead. The former football player could have tumbled over and made a meal of it. As it is, she plays hockey now and is made of stern stuff.

13 – Fine play from GB. Central running, great ball through to Owsley, who spins but Lynch is out quickly and the ball can’t find its way in and rolls under her leg. Australia go straight up the other end. Plenty of space developing here.

It’s all GB in the opening 15 mins. GB working the channels well and circles entries aplenty. Lively start in Perth and, against the run of play, Australia score. Tentative ball across, Toman can’t cover and the ball spins in from Commerford’s stick.

Australia foot. They had no PC rewards in Christchurch and here, Ansley has two bits of the cherry and can’t convert with the second attempt. Runner Bone does a good job. Australia down to nine!

4 – Robertson has the ball and back to goal. She spins quickly, gets her shot off and it’s close. Sanders can’t find anything on the deflection. Australia down to 10.

7 – A speculative ball forward from deep comes off Lynch’s post, luckily for the Hockeyroos no one else is up. At the other end, Cochrane boots clear. It goes forward once more, but another slap ball finds no one in attack.

Teams are lining up in Perth, GB led out by Hollie Pearne-Webb. Nikki Cochrane starts in goal for GB. Georgina Morgan leads Australia for the first time.

“They will put a lot of pressure on us, especially in the midfield,” says GB coach Mark Hager, who noted that his team were under-prepared in Christchurch.

Dixon has one last chance in the Kookaburras circle, with Forsyth unable to latch on. It’s a clean sheet for Australia and a first Pro League defeat for GB. Energy sapping 60 minutes that in the Perth heat. We’ll be back for the Hockeyroos clash, from 0930 GMT.

Comfortable in the end for @Kookaburras with a 2-0 win over @GBHockey in #Perth #FIHProleague pic.twitter.com/F1fkCMqOaR

6 – Ward and Forsyth, both of whom have had little ball up front, are linking up well in the D. It goes long and danger averted.

10 – Australia have closed up shop at the back as far as PCs are concerned. GB play ball retention, but Creed gives the ball away needlessly before Adam Dixon cleans up with incisive tackle from the GB captain.

12 – Forsyth at the other end, on the left, fires over on the backhand. Always rising, but it’s close.

13 – GB have 15 minutes here to salvage a point. Spain did so yesterday, but it’s nearly curtains as Tom Wickham misses a glorious opportunity for 3-0 with an open goal at his mercy.

2 – Calnan intercepts inside the Aussie half. Griffiths is in the mix in the circle, but the turnover ends with Calnan blazing over with his tomahawk shot.

4 – The WACA has its fabled imposing lights. Perth Hockey Stadium has its own variation from the grandstand, which is shadowed across the outfield. 4,000 inside today for this double header. Meanwhile, Australia holding firm with their zonal play.

7 – Swift move into the GB circle by Anderson. On the left he drags low but Pinner clears.

10 – Ames goes quick and left to Forsyth, who goes back to goal and then his backhand strike fizzes across goal but no one can deflect in.

12 – Back under way and Australia’s defence remains firm in Perth.

HT: GB manage to avoid conceding a third as they end the first quarter with possession. Entertaining half in the Perth heat. GB have yet to win at this stadium in five meetings. They’ve been unlucky to go two down given their domination with the ball. But this is the Pro League, remember. Where comebacks are all the rage.

5 – Australia into the GB circle and on top in this quarter now. Whetton latches on to a Swann pass and strikes just wide.

9 – Beale, another stand out for Australia, makes another run into the GB circle. Long corner cleared.

11 – Plenty of possession sees a third PC for England. They vary the castle, Mitton is equal to it and GB can’t get the shot in.

13 – Second GB PC, Ward again at the top of the circle. No 1 runner Mitton shows pace and all-round skills, reaches Ward on the shot and finds the stick.

END Q1 – Lively stuff in the opening 15 mins. Australia with the early honours thanks to fine work by Ockenden. Waller and Wallace have impressed for GB, who’ve had 67 per cent possession. Seven circle entries apiece.

7 – Zach Wallace cuts in from the right and makes hay inside the Australia 23. He earns a PC. GB have 5/10 conversion rate so far, but Ward’s low drag goes just wide.

10 – Second Kookaburra PC but another injection goes awry, this time Swann can’t control and it flays off the edge. Danger cleared. Open game so far.

13 – Dan Beale wins first PC for Australia, with touch on Weir’s foot. Liam Sanford cuts down the danger with typical charge out.

14 – First chance in the circle for GB, Sam Ward offered plenty of space on the left, reaches the baseline but Australia clear.

0 – Off in Perth on a blue sky day. Will Calnan starts his first Pro League match.

07.35
Random fact from commentator Ashley Morrison. The two on-field umpires are officiating together since a junior event back in 1997.

07.25
Two months is a long time in world hockey and England turning to GB will be hoping to reverse their heavy World Cup bronze medal match in India. GB sit pretty with two opening Pro League wins. This will be Danny Kerry’s biggest Pro League test yet, after bagging 12 goals and a 100% success rate.

07.00
Hello, wherever you are, and welcome to our coverage of Great Britain’s double header FIH Pro League clashes against the old rivals at Perth Hockey Stadium.

We will be covering GB men v Kookaburras, at 0730 GMT, before GB women take on the Hockeyroos at 0930 GMT. Two lively games in Perth and ripe for some hockey live blogging.

We were a hockey first at the Commonwealth Games last year when we covered two matches live. It’s no easy task though! But we’re back for more. One thing’s for sure, we’re likely in for more Pro League goals. Brace yourselves!

And don’t forget, yesterday we launched our promotional run ahead of our Hockey Paper launch back in print. Subscribe now and help support us grow the game.