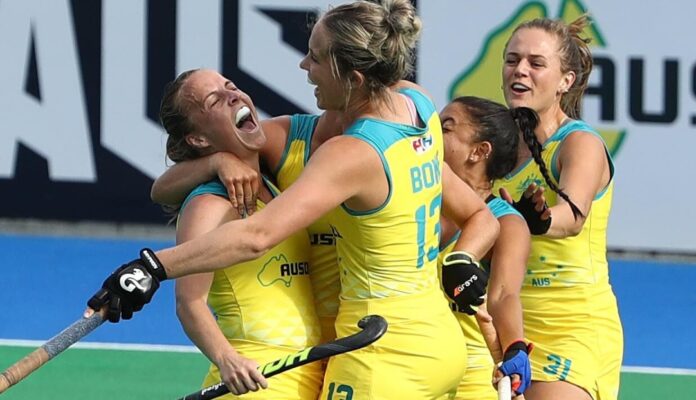 Eighteen matches, 94 goals and an average of five goals per game across the men’s and women’s FIH Pro League. Do teams know there is Olympic qualification at stake?

Another weekend and another hatful of goals, starting in Christchurch with the tournament’s first hat-trick courtesy of Great Britain’s Sam Ward and ending on Sunday in Tasmania.

Germany entered the FIH Pro League fray for the first time this weekend, but Australia took bragging rights in the two games in Hobart.

Australia’s men recovered from last week’s 4-1 home defeat to world champions Belgium by claiming a 4-2 triumph, while the Aussie women claimed a bonus point against their German rivals by winning the shoot-out after a 2-2 draw in normal time.

Florian Fuch’s scored a brilliant deflection at the back post before a Jacob Anderson double gave the hosts the lead.

Lukas Windfeder’s low penalty lifted the visitors before the break as Tobias Walter was kept busy in goal in the third quarter as Tom Wickham and Dylan Wotherspoon secured the points.

“It feels pretty good to get two goals in only my seventh cap, so I’m really happy”, said Anderson.

The one anomoly of the Pro League is that teams can start their campaign with other sides having played three or four games, as Germany found out to their cost.

Germany captain Mats Grambusch said: “We knew it was going to be a hard one against Australia. It was our first Pro League match and we now have to move on from it and go to New Zealand [next weekend].”

📹 interview with player of the match @Hockeyroos Sophie Taylor on her first goal and win over Germany!
And you got to love the 'special appearance' by @RachLynch27 😉 pic.twitter.com/6U0pnr68F6

In the women’s encounter, Australia could have been forgiven for a touch of fatigue after their 4-3 thriller win over China on Saturday.

Germany drew level again through Granitzki, with Charlotte Stapenhorst twice going close before the match finished with the scores level.

In the shoot out, Australia claimed the extra point via a 3-1 shoot-out win.

“It is very exciting, it was a really tough game today”, said Player of the Match Taylor.

“We had a tough weekend last weekend, so it was good to be able to play out the full 60 minutes today and win in shoot-outs. It is a really exciting league to be a part of, so we are looking forward to the next six months and what is ahead.”