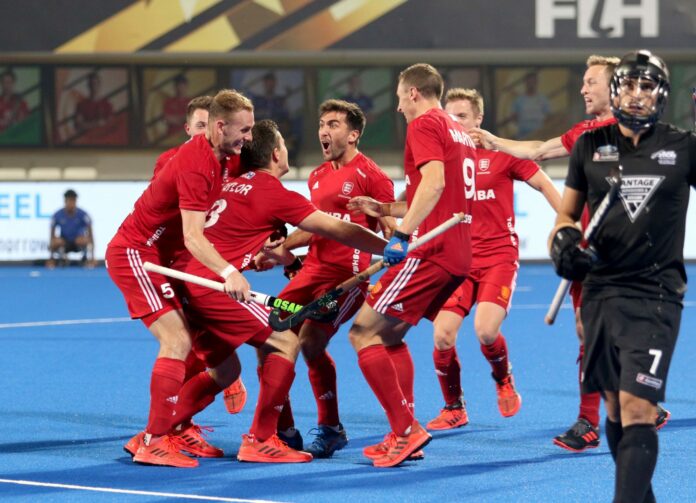 After a fraught Pool stage week, England now have two successive victories after overcoming dangerous New Zealand 2-0 and setting up a World Cup quarter-final showdown against Argentina. There’s a sense of fun and freedom in this long-lasting World Cup.

No homesickness for England. Pinner proved unbeatable between the posts as a Will Calnan volley tap and Luke Taylor slam home put England on track for their third semi-final in a row.

“I haven’t done that since I was about 11 years old and it didn’t go too well the last time I did it,” said Pinner of his theatrics.

“It was a bit of emotion. It’s been an interesting tournament but we’ve grown into it and built on our wins. That’s what great teams of the past do and that’s to build.”

England may yet become a world-beating team but for now their mix of no-fearing youth and wise old campaigners once again proved the winning formula.

“We’ve done our homework over the last few days,” co-captain Phil Roper said. “They are a talented team but we managed to negate their threats.”

Their 25th-minute opener was perfectly crafted. The strong-armed Liam Sanford delivered an aerial pass from half-way to Roper whose four weaving touches and scooped pass left Calnan to volley home from one yard. “I’ve been trying to get that poacher-esque finish to my game and it’s great to get my first,” Calnan said afterwards,

Liam Ansell’s shot on the turn then went inches wide before Pinner had to twice use his pads to deny New Zealand shots. New Zealand accrued 11 shots to England nine, but Pinner never looked in too much danger.

England’s second came via their fourth penalty corner as a rebound off the post fell to Taylor, who rifled home.

“We were given a game plan for 60 minutes and we were absolutely outstanding in the detail,” added Pinner. “To keep a clean sheet is bloody hard to come by so it was a bit of personal satisfaction.”

Calnan, the Hampstead & Westminster forward, is another young prospect thrust into the World Cup by Kerry.

The 22-year-old admitted the game went by in a ‘blur’ but he looked far from overawed last night. “I’ve been trying to get that poacher-esque finish to my game and it’s great to get my first,” he said.

“I don’t feel young and we are such a strong unit that before games it doesn’t feel like I’m sticking out. I feel really comfortable.”

That’s how England’s display largely seemed. There were moments at 1-0 to the good where it seemed edgy, but England’s defence left the Kiwis searching for a goal from distance. Steve Jenness had one chance, otherwise the danger man was kept quiet.

Their decision to opt for a kicking back with 10 minutes left was a sign of England’s domination. But Kerry’s side adapted to the extra man.

England now face an Argentina side who will be playing their first match in six days since a surprise loss to France last week.

“We’ve played two games and they’ve had a week off. We don’t know how it will pan out,” admitted Roper.

What is certain is England’s preparation. Their decision to rent a local restaurant for the month, complete with table tennis and pool, seems a masterstroke. It was intended to avoid ill health, but now it has beaten cabin fever.

“We’ve done as much as we can to make sure this experience is fun and fresh for us,” added Roper.

“We’re trying to grow into the tournament now and Argentina will pose a threat. But we are confident we can put our game out there.

“They are the world No 2, Olympic champions. We are starting to build something. We are having fun and playing our game.”