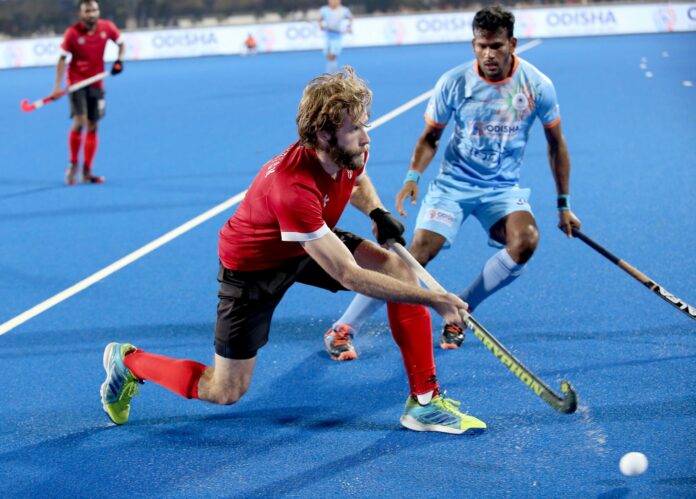 By The Hockey Paper, Bhubaneswar

Spare a thought for Canada.

Having spent a week in Japan before travelling to India, their lengthy sojourn in India will see every player forced to take a month off work from their jobs back home.

Considering that the International Hockey Federation has previously hinted at upping the World Cup to 22 teams for 2022 – presumably over three weeks – it means that there could be six more teams like Canada (perhaps the biggest of the part-time teams) with the same predicament.

“The two weeks are more challenging physically and teams have to be super fit,” said James Kirkpatrick. “I think if you start going into longer tournaments, the sport has to become more professional.”

And therein lies the crux; an enlarged tournament with more ‘amateur’ teams and the FIH is expecting these federations to fork out a substantial sum? How is that growth?

Kirkpatrick is one of the lucky ones. He can hot desk on tour through his work as a full stack (web) developer.

“I remotely on tour and my boss is excellent,” said Kirkpatrick. “It’s really flexible and I work when I can. At tournaments with a lot of down time like this, I can chip away.

“But for some guys it’s really challenging but they make it work.

“I don’t know if I could hold down a full-time job and play lots of tournaments like this throughout the year. We’ll see where it goes.”

World No 11 Canada had a full week before their last group match against India at the weekend – an unheard of length of time for a hockey tournament.

Kirkpatrick added: “It’s been a bit crazy. It’s the longest gap I’ve had in a tournament. It’s been about retraining and refocusing.”

The team left Bhubaneswar and took a few days by the coast in Puri before losing 5-1 to India after proving more than a handful in defence.

“Once you start chasing it’s difficult to get back within reach,” added Kirkpatrick. “We were happy to play with them for the first three quarters.

Now, it’s the Dutch for a place in the last eight. Canada, with their gritty defence and a determined game plan, lost out 3-1 at the World League in London last summer.

And Kirkpatrick says Canada are relishing another showdown. “It will be a fun one. It’s just one game.”