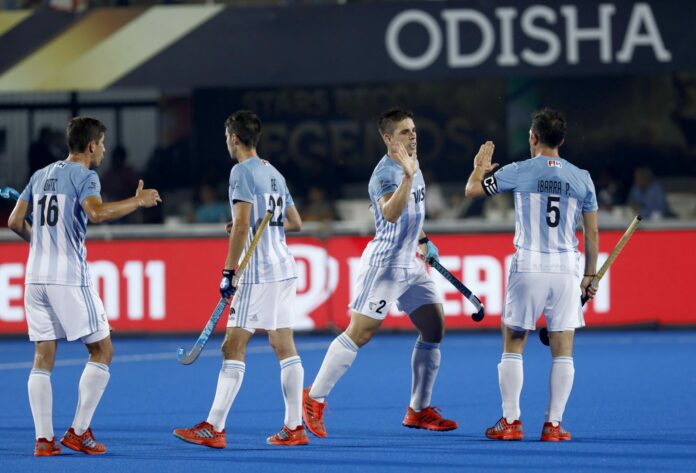 Just four games in and Argentina and Spain have already produced the game of the tournament with the Olympic champions holding out to win 4-3 in a game that went right to the wire.

With the last swing of the match, Enrique Gonzalez just failed to connect with a loose ball that could have given Fred Soyez’s impressive Spaniards a deserved point.

Along with three points though, the Argentinians may also have avoided a smaller but nonetheless awkward little problem.

In the play leading up to Gonzalez’s miss, Juan Lopez deliberately stood over the free hit that he had just conceded by fouling Xavi Lleonart, deliberately preventing the Spaniard from making a last-ditch pass into the attacking circle.

Knowing full well what he was up to, Lleonart’s first attempt at a pass caught Lopez high on the leg. Umpire Marcin Grochal, also recognising what Lopez was up to, then allowed Lleonart to play on and make the pass which led to the missed shot.

Of course the fact that Gonzalez had the chance to equalise meant that Lopez’s efforts hadn’t deprived Spain to any great extent, but shouldn’t Lopez still have been given a yellow card?

He certainly would have done at any other point in the match and the fact that there was only seconds remaining made it even more cynical. At the very least, surely Lopez should be carrying the same pressure of a match suspension into the next game that a second yellow card carries at the football World Cup?

But, while it seems that Lopez may have avoided a deserved yellow, he’s a long way from having got out of jail.

Not for the first time, it seems, hockey is way ahead of football. It was news to me and probably to some others that we don’t actually operate on an automatic suspension for two yellows, irrespective of what they were for.

Suspensions are in fact down to the discretion of the all-powerful technical delegate, which means that Lopez could potentially be suspended for his bit of cynical play, without having been given one, let alone two yellows, if the TD thought it was a bad enough offence.

At the very least, I’m told, Lopez will almost certainly have had a quiet word in his ear from the TD, just letting him know that while doing his best to stop the free hit didn’t end up affecting the game, it had still been noted and had better not happen again.

After all, we want more finishes like Germany’s incredible comeback from 2-1 down against NZ with 40-odd seconds to go in Rio – akin to something you’d see in eSports – rather than a final minute littered with time-wasting and professional fouls.