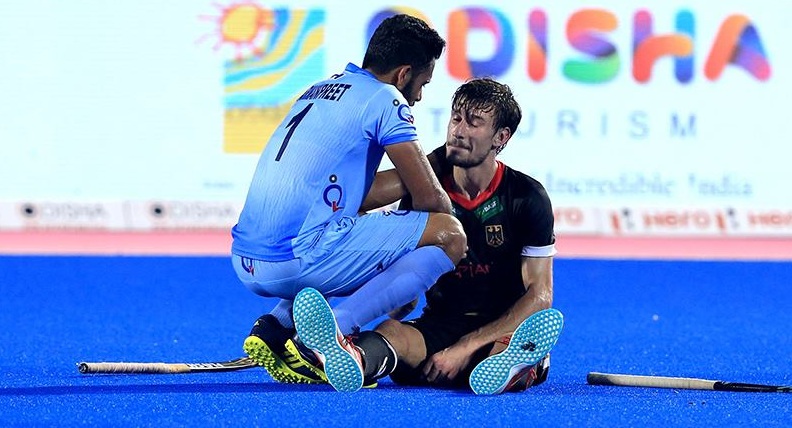 It was a case of forced bravado which propelled Germany into the hearts of the hockey world and the Indian paying public after the World League bronze medal clash last December saw a goalkeeper score a field goal for the first time.

Bhubaneswar was the venue, host of this year’s World Cup, with the World League Finals no doubt forming a key review in this year’s preparations for the competing teams – at least in terms of health.

Germany had felt the full force of a ‘mystery illness’ more than most. For their semi-final against Australia, they had 13 fit players, with four sidelined.

Twenty four hours later, that number had wilted to 11 fit players, with six laid up at the team hotel and one flown back home.

By the time they ran out for the bronze medal match against the hosts, they had no substitutes and a goalkeeper, Mark Appel, who doubled up as a forward. India, in contrast, were at full strength.

“We had a meeting in the morning,” Germany’s Mats Grambusch told local media at the time. “We said, ‘Guys, are we going to go for it, go for bronze?’

“And everybody said ‘let’s do it.’ So we started working on our strategy. In the end we are nothing but proud of our performance.”

And how. They earned seven penalty corners in all, the last one with four minutes remaining, with the players dead on their feet and playing enforced 80s’ rules; without the luxury of subs but with the desire to play (they had been asked by the FIH whether they wanted to forfeit the match).

SV Sunil predictably gave India the lead. Then, the real story as Appel, the German goalkeeper who was virtually camped in the Indian D as a ruse, netted for the ‘underdog’ European outfit.

As the video above reveals, the two German TV commentators proclaiming ‘…MARK APPEL’ in wondrous disbelief painted the picture.

In the end, Harmanpreet Singh’s goal proved decisive. At the hooter, the German players fell to the ground. The Indian crowd rose to their feet and the players consoled their beaten, heroic opposition.

By next year, he meant this World Cup. Only this time there is to be no place for Appel in his usual position.

The Hockey Paper had made contact with the Alster stopper to talk us through his memories of last December before the German to suffer a muscle injury during their recent training session in Alicante, Spain. He was forced to pull out of the World Cup and The Hockey Paper wishes him a speedy recovery.