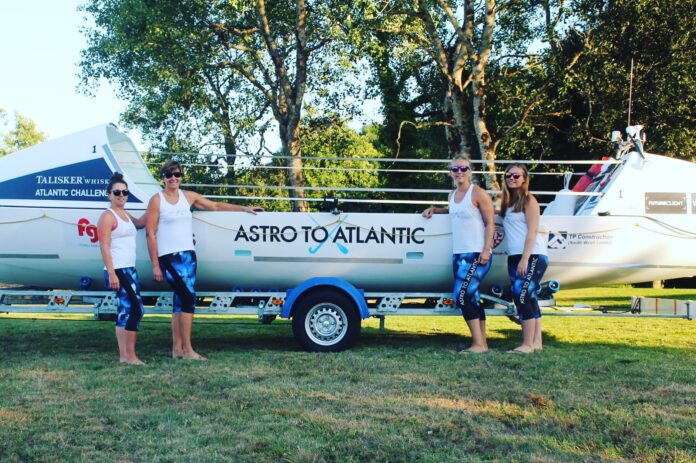 In December, four team-mates will take on the Talisker Whiskey Atlantic Challenge, a daunting 3,000-mile row from the Canary Islands to Antigua. Louise Read, Helen Symons, Chloe Harvey and Emily Read play for Kingsbridge and Salcombe HockeyClub, Devon and have played together for the last 12 years. The Hockey Paper charts their story.

The idea of the challenge came about whilst Lou and Helen were on a previous challenge, cycling from John O’Groats to Lands End in 2015. They were cycling up numerous hills day after day trying to occupy their thoughts with anything other than more cycling, where it was suggested if they could cycle the length of the country then why not embark on a whole new scale of challenge; rowing the Atlantic Ocean! Plus the Atlantic was flat, right?! The dream soon became a reality on New Years Eve 2016 when they decided yes this was it, this was their goal. They soon asked their two hockey teammates Chloe and Emily to join them – who could turn down rowing the Atlantic with three awesome teammates?

This was our team and the beginning of our adventure. We wanted a challenge to take us completely out of our comfort zones and one which would really push us to the edge. We want to empower women and show that anything is possible, you just need to have the confidence to take that first step. We are looking forward to being able to share that sense of achievement with each other once we’ve made it to the other side, and also knowing that, whilst we have done it for each other, the Devon Air Ambulance Trust, our chosen charity, will be benefiting hugely from our challenge which will make everything so much more worthwhile.

We will celebrate three out of the four of our birthdays at sea – Lou will be turning the big 50! Helen will turn 33 and Emily will celebrate her 21st birthday, all within the six weeks of our crossing! Lou and Emily are mother and daughter, only the second ever mother and daughter combination to take on the race. We will also be the first hockey team to row an ocean.

Yes, we are competitive hockey players after all! We’d love to set a new World or British Record, the British Record for a female four is currently 40 days and the World record is at 34 days. However with all world record attempts there has to come a hint of good fortune, and our safety at sea is also paramount. We are fully aware that the weather plays a huge part on the speed of the crossing. 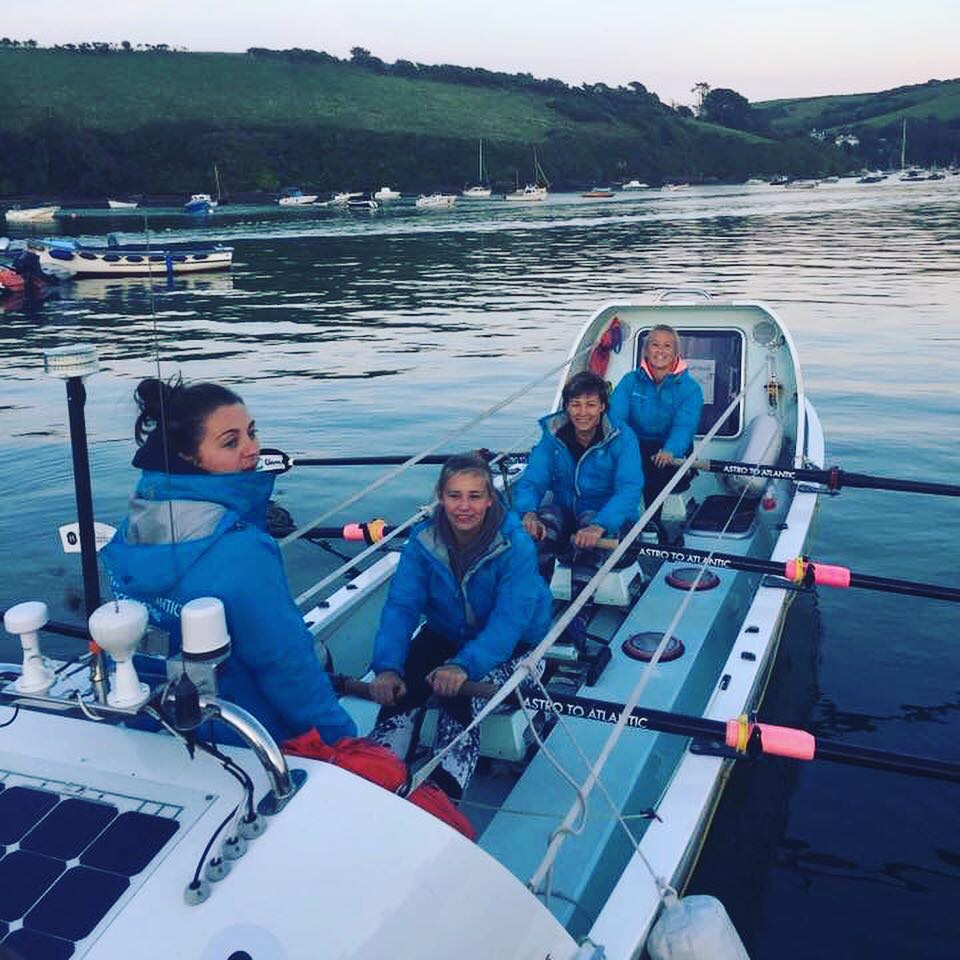 We have to be realistic as we are largely dependent on the winds and weather systems of our race. If we have strong trade winds in our favour we believe we are totally capable of breaking that record as we have the strength and determination to do so. We will prepare ourselves as best as we possibly can and with our positive attitudes we know it is achievable. If we were to finish the race in anything under 40 days we would set a new British Record for a female four crossing which we would be very proud of.

Rowing across the Atlantic, not many have achieved the feat…

True, it is known as ‘The Worlds Toughest Row’. More people have been into space than have rowed across the Atlantic Ocean. Of the 27 teams entered in last year’s race, only three were female. A scary statistic which we’d love to challenge and inspire more women to step outside their comfort zones. Until last summer, we had very limited rowing experience, we were hockey players with a thirst for adventure!

What are the dangers awaiting the crew and how have you prepared?

There are several dangers of this crossing namely: storms to include 40ft waves, capsizes, equipment failure, injuries, seasickness, physical and mental exhaustion. 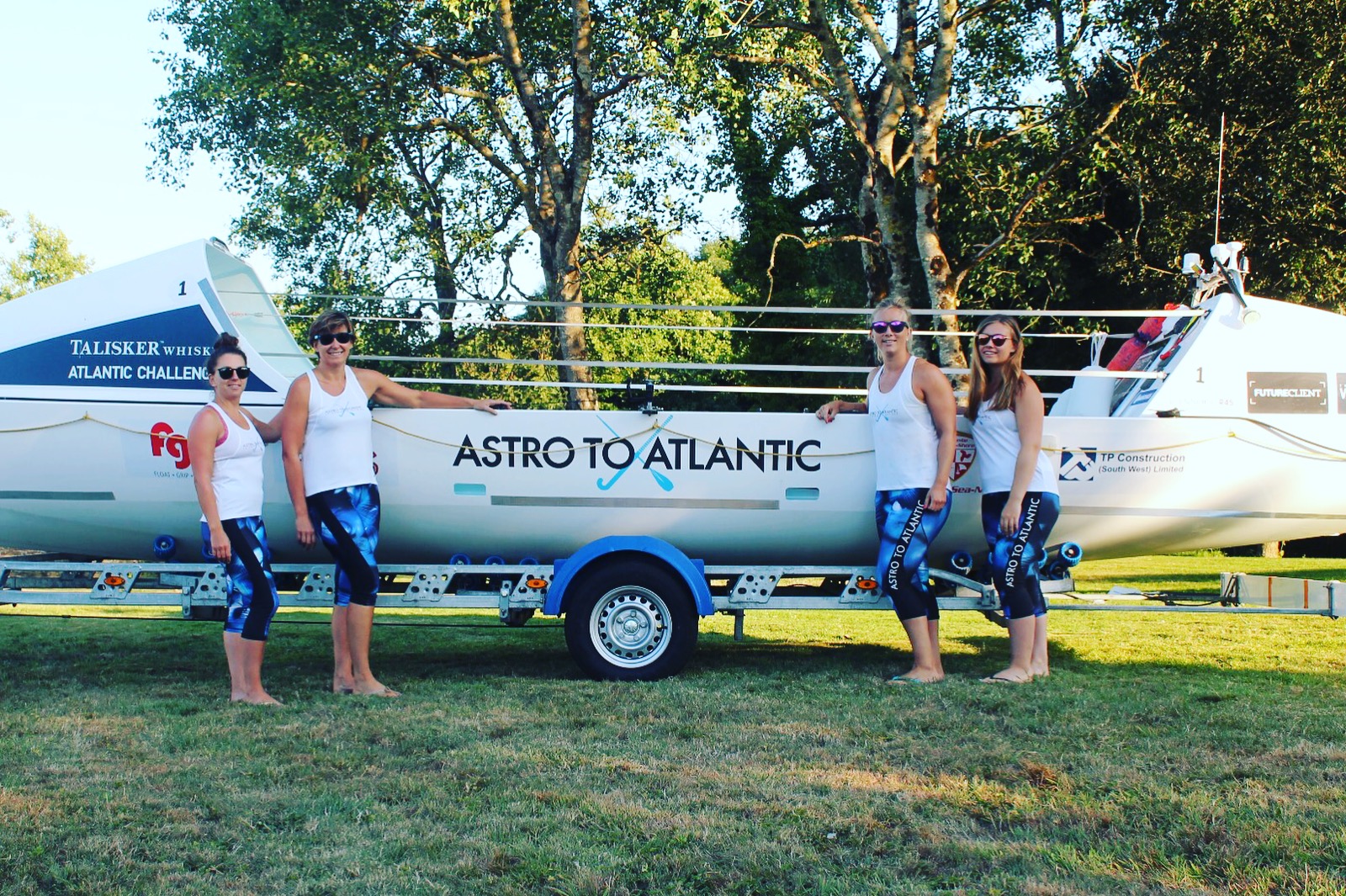 We have been preparing for the past 18 months and always break things down as a team into manageable amounts. The storms and capsizes our boat is built for, it can ride the waves and will self right in any capsize situation. We trust our boat completely and have learnt a lot in training trialling the different sea states. With equipment failure, we have prepared as best as we can to be able to fix all equipment on board, we are now pretty handy with our toolkit!

This crossing is completely unassisted, it is down to us to repair everything. Injuries and physical factors are a case of looking after our bodies, we train hard and ensure we eat well and have enough rest to recuperate for our next training sessions, we have to maintain the balance to ensure our bodies are in the best shape for race start on December 12. Mentally we have also been preparing, we have had some psychology advice and testing to ensure our minds can cope with the elements the Atlantic will bring.

Our team spirit is always our strongest attribute and this has particularly shone through with preparation of this challenge. What are you most looking forward to?

A combination of things: seeing amazing wildlife; whales, dolphins, turtles, and witnessing beautiful sunsets and sunrises out on the ocean.

Really pushing ourselves to the limit, both physically and mentally – we know this challenge will take everything we have and we are as determined as ever. Having played hockey together for so many years, we know each other inside out. It is incredible to be able to complete this challenge together.

Finally reaching Antigua, seeing our loved ones after weeks at sea and having that huge sense of achievement that we have crossed 3,000 miles of unforgiving ocean. Not a statement that many can say, especially four women!

And what will be the biggest challenges?

We will all have our own individual challenges while we are on the boat but some of the hardest ones will be the sleep deprivation until our bodies clocks get used to the two hour on, two hour off shift pattern, having to deal with prolonged periods of seasickness, being cold and wet and missing our families and friends back at home. But inevitably the biggest challenge will be the mental one, the monotony of being at sea on what seems like an endless ocean with no other company or entertainment than ourselves. 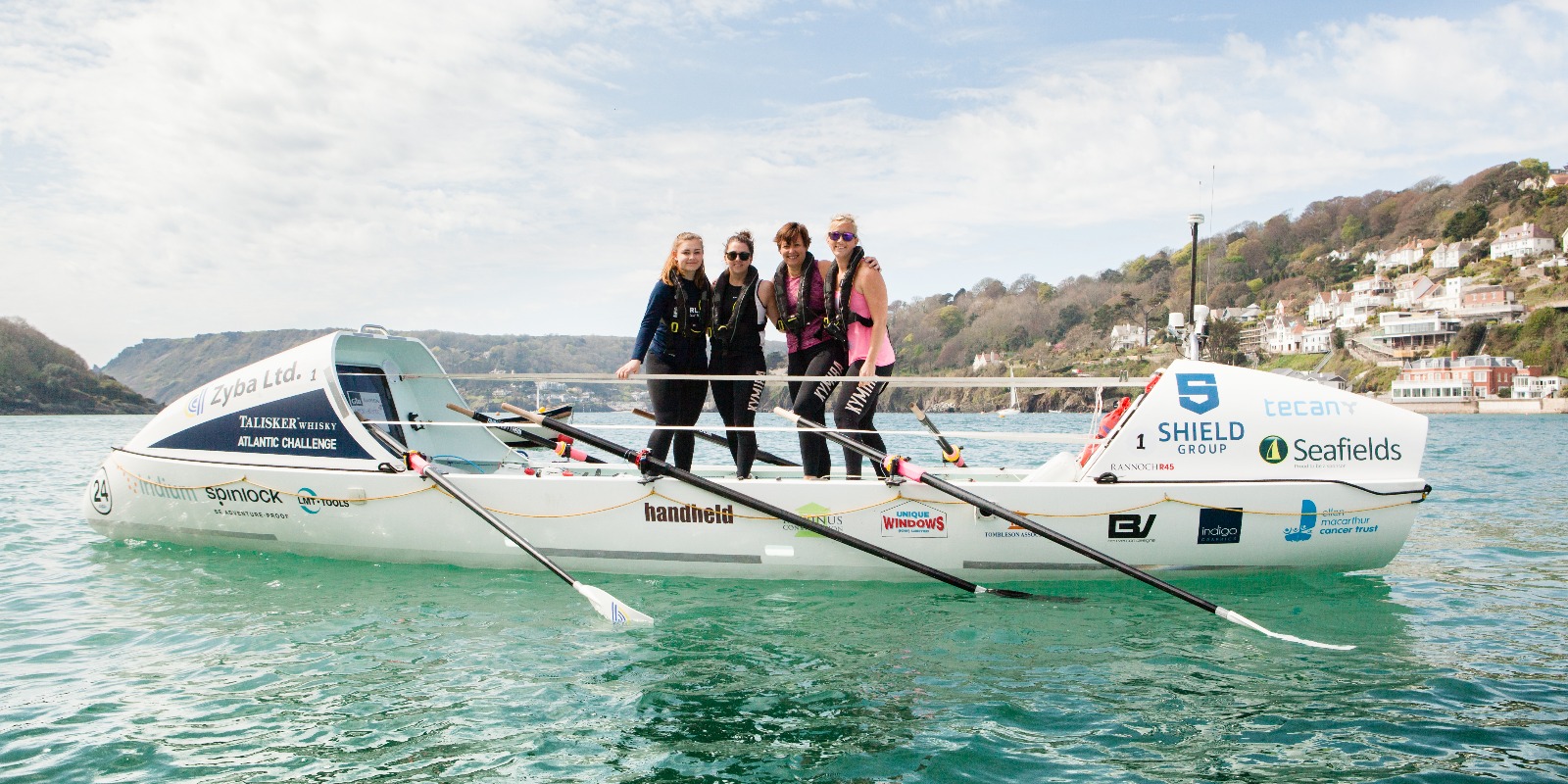 Will you miss hockey?

Yes, absolutely. We are hockey players through and through. Hockey is routine life for us at home so it will be strange to not be playing this winter.

A few of our hockey team mates have been supporting us in our preparations, with helping organise our fundraising events, encouraging us in our fitness regime – we all train together in various activities throughout the week and the squad is one of our driving forces in those tough gym sessions. Hopefully they’ll be super happy if we can break a record and still make it home in time to play hockey on Saturday!

Will you take any hockey related items on board and will you be thinking of the sport?

Yes we are taking a hockey stick with us, it will come out for photo opportunities across the Atlantic ocean! Not many can have that opportunity!

We will 100 per cent be thinking of the sport and our team. We will be rooting for them from the Atlantic and each time we reach a Saturday match day we’ll be thinking of our team and their match preparations. We know they will be giving their all in matches whilst we give ours on the oars. 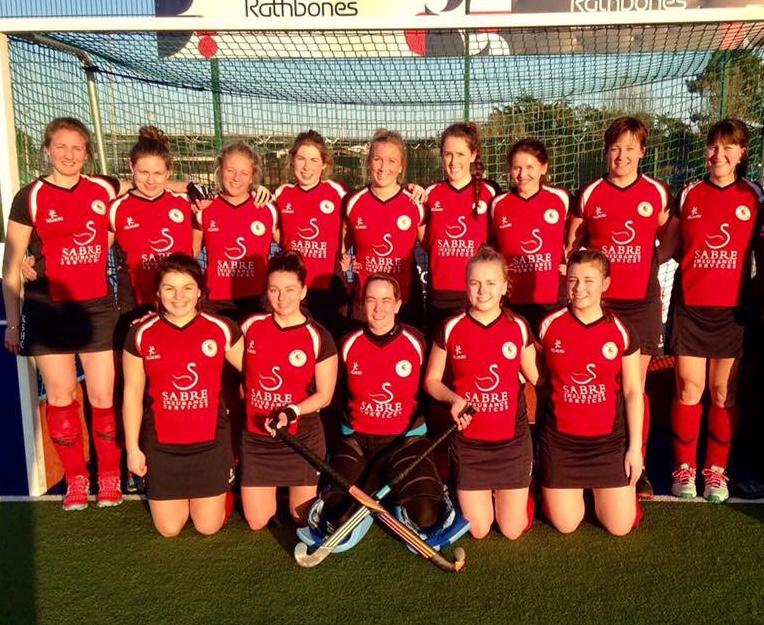 Will being team-mates already at Cougars hold you in good stead?

Yes definitely, being part of this unique crew, we started our campaign as great team mates on the hockey pitch and now we rarely go a day without seeing each other, we are all such strong minded women and our team morale is always one of our strengths.

We are taking the camaraderie and competitiveness that we have on the pitch and putting it to practice for our training of the Atlantic.

Coming from such a great team and knowing each other so well gives us a massive amount of confidence in our ability to take on the Atlantic.

We believe our hockey experiences together will be a great advantage, we have been through some extreme highs and lows within our hockey seasons. We know each other’s strengths and weaknesses and our natural instinct to recognise when someone is feeling low and how to boost them on is a huge benefit for us, making the transition from hockey to rowing much smoother.

Our hockey fitness is very transferable, we always work hard to maintain our base endurance fitness which has aided our long 2 hour rowing sessions. We are preparing to row for two hours at a time as our crossing will be based on shift patterns of two hours on, two hours off 24 hours a day. Although they are very different sports, we believe our team grit, determination and willpower will serve us well during our Atlantic crossing. 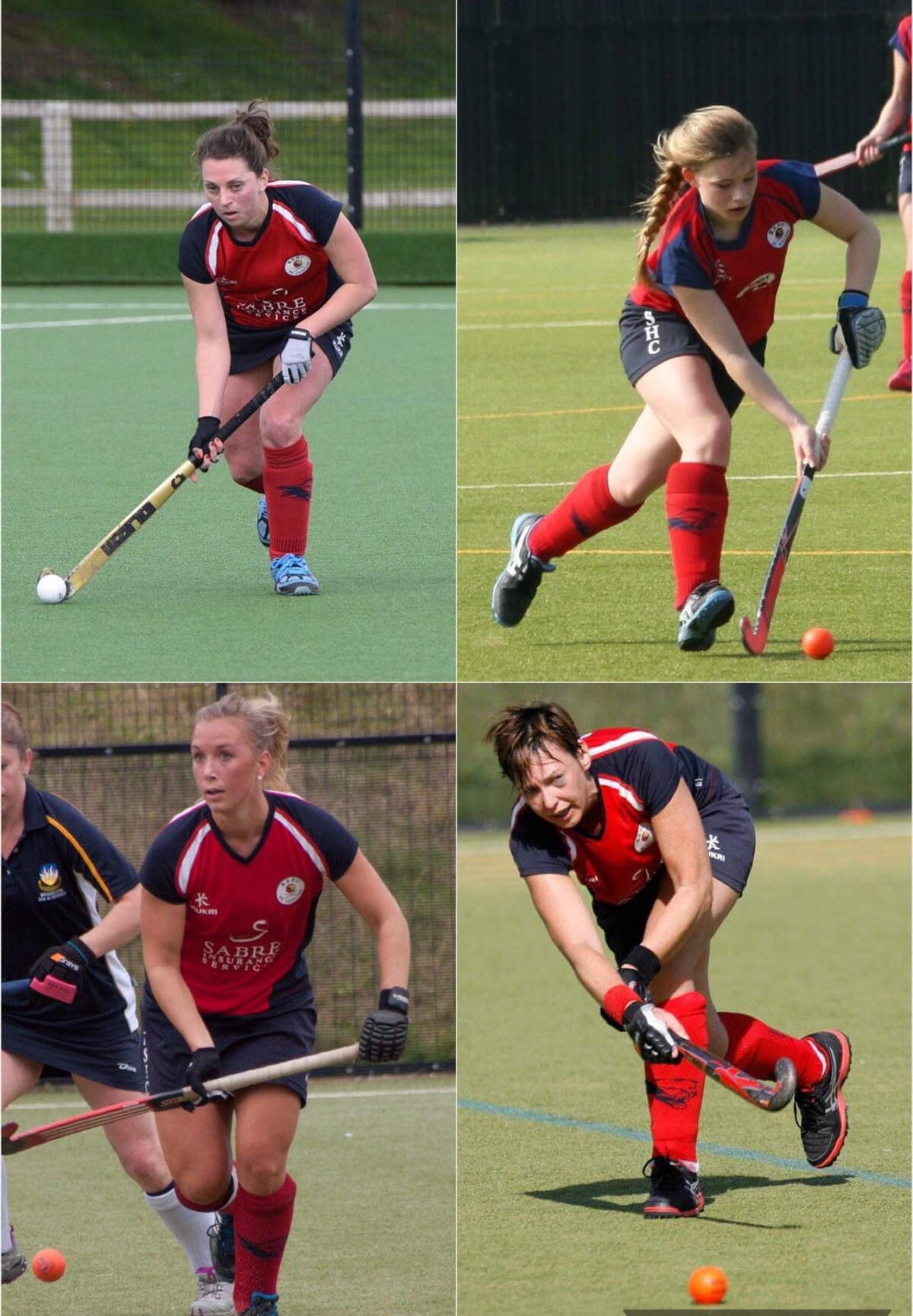