Nick Bandurak takes lead for club, school … and his Doberman 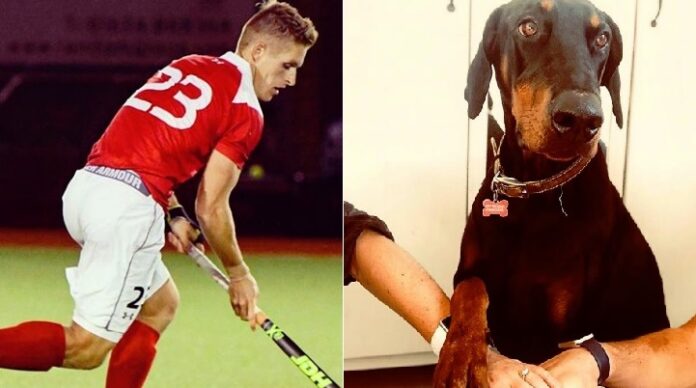 As England’s leading scorer in the men’s hockey top flight, Nick Bandurak is in sizzling form for Holcombe. The 25-year-old has bagged nine goals in four matches this season, including five times against Sevenoaks, and kept the Kent side top of the Men’s Premier Division with another strike against hapless Wimbledon at the weekend.

What has contributed to the Medway mean machine’s hot streak in front of goal, you ask?

It could well be threefold.

First there’s his new job which he started in September – head of Hockey at Danes Hill in Surrey in September.

Or could it be the off field distractions of his and fiancee (and fellow Holcombe player) Emma Trunks’ dog, Rollo, a strapping 46kg Doberman?

Then there’s the form of Holcombe, a tight-knit team which Bandurak admits has yet to even hit top form.

He said: “We had a great start three years ago when we went unbeaten through the regular season so we have an appreciation of the hard work that goes into making this kind of start, but more importantly capitalising on it throughout the season.

“We’re a really tight group both on and off the pitch. We’ve been lucky enough to retain the majority of our core group from last season so we all know our roles and what we bring to the table.”

Bandurak got two goals that day, with field goals counting for double in a short-lived experiment, but the team that day have used the defeat to their advantage.

“There’s no secret to what we did over the summer; the guys just worked extremely hard,” added Bandurak, who joined from Cannock in 2015.

“We’ve had the reminder of KO16 in the back of our minds throughout the summer and it’s given us the platform from which to work. But we know we’re not playing as well as we can do at the moment.”

With Hampstead & Westminster lying second on an inferior goal difference as the only other unbeaten side in the league, it is the other top clubs which are already chasing.

And Bandurak knows all about that, having been kept on his toes off the field thanks to an 18-month-old Doberman.

“It’s awesome getting out with him and he absolutely loves his running,” said Bandurak, whose love for his pet is evident on his Instagram account. “You begin to regret it when he’s cruising at 4min/km and dragging you along but he’s great value!

“He’s definitely my fiancee’s dog though. Em’s had him almost entirely to herself since I started my new job so she’s getting the benefits of walking him far more than me!”

Which, of course, is giving Bandurak the spark to perform in this searing early season form of his.