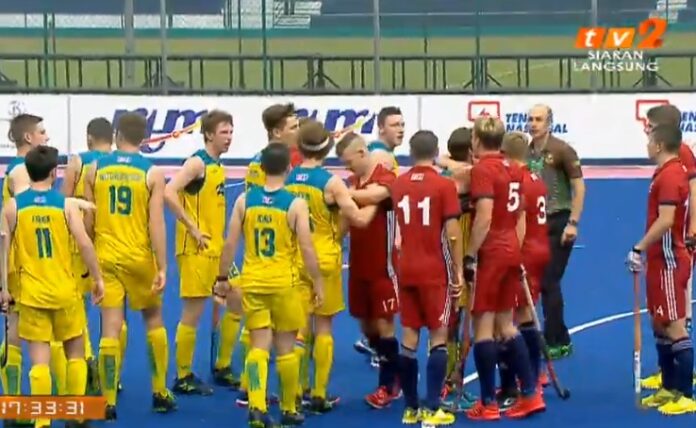 Spicy sporting rivalry between Great Britain and Australia extended to the under-21 Sultan of Johor Cup on Tuesday.

A tempestuous ending briefly overshadowed a fine comeback from Britain as Cameron Golden scored two goals in a minute to earn a point in a lively 2-2 draw against the defending champions in Malaysia.

As the hooter sounded, Draper then looked to have pushed an Australian to the ground in the circle as tempers frayed and the teams briefly locked together before being pulled apart by coaching staff.

It was an acrimonious ending to an exciting, hard-fought and passionate match between the two old rivals.

Earlier, Britain were pinned back after strikes either side of half-time from Blake Wotherspoon and Nathan Ephraums.

The two teams now have four points each after a win and a draw and sit behind India and Japan in the table.

Great Britain play hosts Malaysia on Wednesday and coach Bleby says his side’s tournament will only get better.

“It is always good to get a point off Australia,” said Bleby.

“We played well in the later stages and I always felt that getting a goal back would shift the momentum our way. We still have two matches to go and we will take one step at a time.

“We play the Host Malaysia next and that cannot be an easy match either. This tournament gives a lot of learning experience for the players and we are happy with the exposure they have had. I think we will get going from now.”