Belgium’s top clubs have been struck down by crop circle circle style markings on their hockey pitches.

Royal Leopold’s pitch was photographed after a recent deluge of rain with huge mushroom rings across its outfield.

“In a few minutes, the ground 1 was submerged under water; more than four centimetres,” according to a report on okey.be.

“And then gradually came some green rings, mostly round. Which disappeared under a new rain.

“Then they came back. In fact, big air bubbles lifted the carpet; circles that were several metres long and saw the carpet forming mushrooms several inches high.” 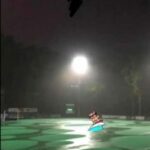 Meanwhile, KHC Dragons seemed to have the same water-based problem after an image was posted on social media by Tommy Willems, left.

Air bubble pockets seem to be the likely explanation, as opposed to a case of ‘fairy rings’, the scourge of groundsman attending to grass pitches.

There are several types of the disease which can be caused by dozens of different fungi, with a release of excess nitrogen causing the circle ‘phenomenon’.