Carla Rebecchi returns to Argentina hockey ahead of Tokyo 2020 Olympics 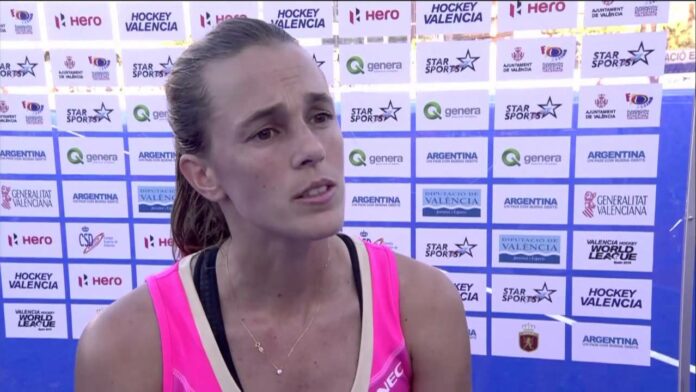 The lure of playing in the famous Las Leonas shirt has proved too great for Carla Rebecchi.

The Argentinian has returned to the national squad, 18 months after retiring from the game – and six months after becoming a mother and starting a family.

Rebecchi, 33, will now aim to make the Tokyo 2020 Olympics and become a key cog alongside Delfina Merino in coach Agustín Corradini’s youthful squad after their seventh place finish at the recent Women’s World Cup.

Rebecchi originally retired at the beginning of 2017 after 14 seasons playing at the top level of the game.

But Corradini has clearly proved instrumental in Rebecchi’s return to the Las Leonas squad last week.

She told Argentine media: “The call of Agustín came after the World Cup, talking about the project from here to the Olympic Games of Tokyo 2020.

“What excited me most to make the decision, beyond obviously wearing the Argentine shirt, is to have another opportunity at this moment.

“I think it adds a lot to me that it’s a young team, that I see a lot of talent in the players, I would like it as a dream and aim to be able to play another Olympic Games.”

To date, she has played three World Cups, having captured gold in 2010 after winning best junior at the 2006 edition. At the Olympics, she won bronze at Beijin 2008 and silver at London 2012.

The temptation of trying to win a first gold at Tokyo 2020 has clearly proved too great.

Rebecchi will now be aiming to win a place in the Argentina squad for the final Champions Trophy tournament in China ahead of next year’s Pro League launch.