After the Hockey World Cup, a month to savour for Ireland women 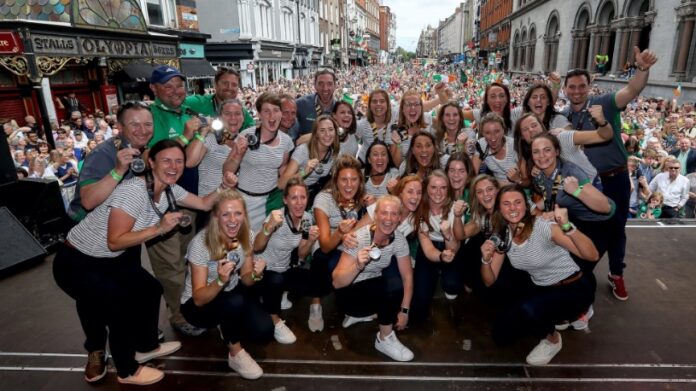 It’s been three weeks since Ireland returned home from the Women’s World Cup after a silver medal and the hockey world and beyond fully in tune with the squad’s brilliant rise from amateur status to world finalists.

It’s fair to say too that life has not been the same for the returning heroines and, indeed, Irish hockey since the team’s reception in Dublin’s City Hall and the dancing on Dame Street. Here, The Hockey Paper brings to life the last 20-odd days.

It started with that singalong in Dublin.  “All I Want for Christmas is You” by Mariah Carey, the diva star even sharing the below video on Twitter, with ‘That’s A-mazing’.

Extraordinary scenes in Dublin- all I want for Christmas in August pic.twitter.com/0Um8kIPeql

Their silver medal was watched by over 40 per cent of Ireland’s TV viewers, drawing an average audience of 381,500. The FIH then released the world rankings, which saw Ireland move up eight places to eighth in the world. Both Ireland men’s and women’s teams now holding world top 10 berths.

"We want to get as many home fixtures as we can and really drive the momentum that we have. But it is difficult when you don't have a place to play"https://t.co/JktV83p9PK

Success has not gone to their heads. Some of the Irish team then visited Our Lady’s Children’s Hospital, Crumlin, which included making the day of Eadba Ni Chathasaigh and her mother.

Days before, the Irish contingent at the Masters World Cup in Barcelona watched in delight as they made they way into the semi-finals.

Soon, the stats were coming out. Including this gem: Zoe Wilson was, apparently, the third ever bespectacled hockey player, to play in a Word Cup Final.

And that Irish dancing, 11 years of it, was behind the success of the World Cup’s goalkeeper of the tournament.

The best hockey goalkeeper in the world – Ayeisha McFerran from Larne.
Secret of her quick feet?
11 years of Irish dancing. pic.twitter.com/0x9UsnnzLY

This is one of many reasons why …

… and left plenty of young fans hopefully following in their footsteps.

A week after their return, 500,000 Euros was handed to Ireland hockey to assist both men’s and women’s teams in realising their Olympic ambitions ahead of Tokyo 2020.