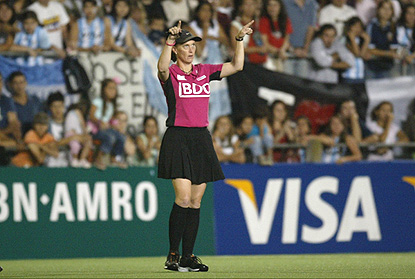 From the archive
Analysis

Not surprisingly, the first shoot out of the Vitality Women’s World Cup created the tournament’s first genuine controversy. With Louise Versavel needing to score to keep Belgium alive, the enormously experienced umpire Michelle Joubert, awarded a free hit against the Belgian attacker for obstruction on the Spanish goalkeeper. Spain are now in the semi-finals.

There has been plenty of conjecture as to whether the decision was correct. To me, there wasn’t enough for it to have crossed the “obstruction” line but on the other hand, a far greater authority, the multiple Olympic and World Cup umpire John Wright, said on Twitter that the decision was spot on.

But whether the decision was right or wrong doesn’t really seem to be the issue. What seems far more relevant is why Michelle Joubert chose to blow the whistle and not wait until the play ended, one way or another.

By deciding to intervene before any shot or save was made, Joubert, for all her experience, put herself into the still precarious territory of being perceived as the match decider. Had the play been allowed to continue, the onus would have stayed on the players as well as allowing Joubert to stay true to a couple of age-old, but still important, umpiring principles.

Obstruction or not, a shot over the backline or cleared by the goalkeeper, would have meant no decision to make. Relatively speaking we then wouldn’t have known the umpire was there. Had a goal been scored, the umpire, having sensed a possible obstruction, could have used her referral. At least she would have ensured that she only had to blow the whistle when she had to.

As it was, the play was cut short not for an obvious foot or back of the stick but for a subjective decision with both players still in the contest for the ball. Belgium, having used their own review, were then doubly frustrated that Joubert would not review the decision herself but, in her defence, that would have raised a new set of issues.

Not only was it reasonable for Joubert to be 100% confident in her decision but umpire reviews are not intended to be prompted by aggrieved teams who have used up their own referral. Unfortunately, though, this turned an already messy situation into a fully-blown controversy.

And it is this point that is far more important than whether Louise Varsavel was backing into the Spanish goalkeeper or not. With no extra time and double the number of knockout games, umpires need to be experts in understanding and managing shootouts.

To that end, surely they should be allowed to use all the resources they have available to help them reach their decisions. So rather than just using referrals in shootouts as it is used in normal time, maybe it makes more sense for the for the Video Umpire to go and grab a cup of tea and let the umpires to use the replays in shootouts for themselves?

How much better would it have been for everyone had Joubert been able to just signal for a possible breach, and then four seconds later as the play had finished, use one of the conveniently placed big screens, as referees do in Rugby Union, to review her decision, if it was still needed?

Referrals to the Video Umpire are great for situations where the speed or congestion of the play have made life difficult for the one umpire in thier circle but the simple fact is that shootouts rarely throw up those type of problems.

Not only do hockey shoot outs have one umpire perfectly positioned to watch the two competing players right in front of them but unlike in normal play, the other umpire is standing just as far away on the other side of the circle. Surely those two people, with the added advantage of having been right next to the live action as it happened, are better placed to work out the right decision from exactly the same replays that the Video Umpire has access to?

Obstruction or not, the conclusion to the tournament’s first shoot out was untidy and unsatisfactory and in its current form, there’s nothing to say that the same sort of scenario won’t happen again.

Shoot outs are an exciting, competitive conclusion to matches but they will only be better than the lottery of penalty strokes if we increase the chances for the on-field umpires to make the right calls.