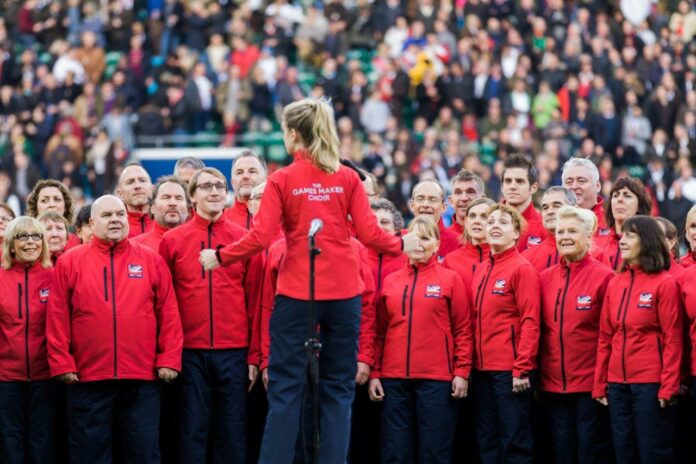 Ireland’s players will experience a rush of choral support before their World Cup semi-final push back against Spain on Saturday.

The Games Maker Choir, formed at the London 2012 Olympics, will be making a special appearance at the Olympic Park as the 60-strong formation sings the national anthems ahead of the two slated matches.

All four national anthems will be sung – Australia and Holland contest the second semi-final – with the Irish anthem perhaps producing the most rousing of all given the Green Army’s connection with the London venue and the expected influx of support for the surprise package of this World Cup.

“It’s quite a surreal feeling” said Margaret Carleton, one of 60 choir members who will be singing on Saturday.

“Just looking back at the crowds and waiting for your turn must be just what it’s like for the players waiting to start the match – nervous excitement and the pressure to succeed.”

The Choir was founded by Victoria Verbi at the Queen Elizabeth Olympic Park, during the London 2012 Olympics, to harness the amazing spirit of the 70,000 Games Maker volunteers and have some fun in the process.

Six years on the choir is now the go to “Choir for Sport”, with 100 members who rehearse regularly in SW London with people travelling from far and wide to perform at some of the nation’s biggest sporting events.

Verbi said: “We are delighted to be appearing at the Women’s Hockey World Cup supporting the teams and entertaining the crowds.

“The Football World Cup has already given us all a taste of exciting World Cup action this summer, and we’re thrilled to add to the amazing atmosphere.”

In 2017 the choir had the honour of opening The World Athletics Championships at The London Stadium to a global TV audience of millions.

They have also performed at The Rugby League World Cup at Wembley Stadium and as well as Rugby World Cup and Premiership Double Header at Twickenham, the Tour de France in Trafalgar Square, Sport Relief at The Olympic Park, The Commonwealth Games in Glasgow and Help for Heroes in Horse Guards Parade.