Hockey World Cup: Controversy as Belgium denied in shoot out over Spain 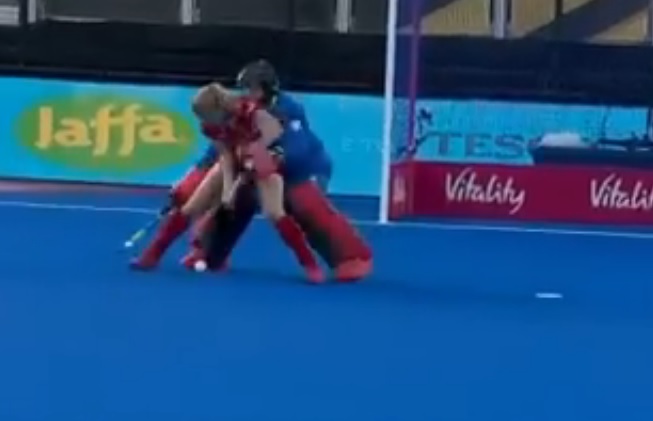 Belgium’s Red Panthers were denied the chance of a World Cup quarter-final berth in controversial fashion as Spain advanced in a tense shoot out on Tuesday.

With the scores locked at 3-2 to Spain in sudden death, and after 12 shuttles, Louise Versavel had to score to keep Belgium in the game.

But with her back to goal in the D she was adjudged to have backed into Spanish goalkeeper Maria Ruiz by umpire Michelle Joubert and the game ended abruptly.

With no video referral forthcoming, Belgium remonstrated with Joubert leaving Spain, who achieved fourth in 2006, to celebrate wildly.

It did seem a particularly harsh decision given that the same obstruction ‘offence’ would generally be considered legal on the field during normal play.

However the FIH said in a statement to The Hockey Paper that video referral regulations do not allow the umpire to refer decisions of this nature, while “the footage shows the Belgium player backing into the Spain goalkeeper which is an obstruction.”

“Our world cup ends here, this is sport,” tweeted the Red Panthers account on social media.

The decision marred an otherwise drab play-off game after it had finished 0-0 at full-time. Germany now play Spain in the last eight.

People are NOT happy…

Argentina, the 2010 champions, beat New Zealand, the Commonwealth champions, 2-0 in the late play-off match to set up a quarter-final meeting with Australia on Wednesday.

The goals came from Noel Barrionuevo and Delfina Merino.

The Hockeyroos will be without Kalindi Commerford, who has been ruled out of the World Cup after sustaining an injury against New Zealand in the Pool stages.

Italy and India play the third play-off match on Tuesday, before hosts England take on South Korea for the chance to take on Holland, the holders, in the last eight.