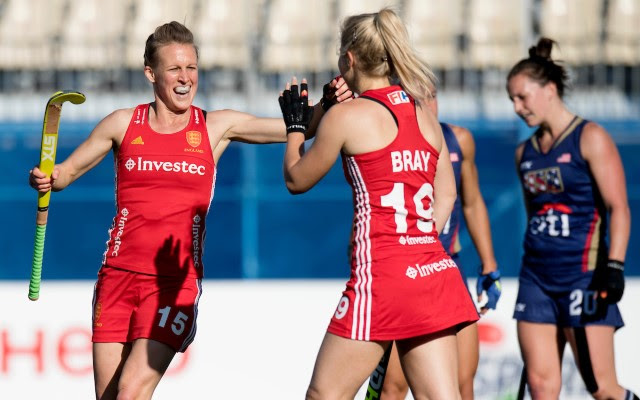 Giselle Ansley has admitted that England are not relying on captain fantastic Alex Danson to keep them alive in the Women’s Hockey World Cup.

Danson, 33, scored a sublime individual goal against USA on Wednesday, but their subsequent 1-1 draw leaves them in a precarious position heading into this weekend.

England need to win against Ireland on Sunday to finish second in Pool B and secure a play-off match against one of Korea, China or Italy.

Victory there would mean a quarter-final showdown with rivals Holland.

There are further permutations. If England finish third (USA beat India and Ireland beat the hosts), then they would play Korea, China or Italy, but with a quarter-final against Ireland.

Moreover, England can finish bottom and crash out of the World Cup if Ireland beat them and USA and India share a scoring draw.

But for England to secure a play-off spot, they will first need the stick skills of Sophie Bray and Lily Owsley to shine against Ireland.

“You have to use the strength of the team and we don’t rely on any one player in the team,” said an upbeat Ansley. “Everyone has a role to play in the squad and they stick to that.

“As a high striker you want to feed them up front. It’s not a reliance on Alex and it’s great she scored on her 200th game as she is a fantastic leader.”

This World Cup has thrown up some surprise results, not least by Ireland, the 16th-ranked side topping Pool B thanks to a 1-0 win over India to send the Green Army support into overdrive.

Ansley added: “You could get caught up in other results and what’s going on in other pools, but now our thoughts are on Sunday.

“We saw Ireland put in a cracking performance against the USA but we know we can put in another good show.”

A semi-professional side, their performance was heralded by Shirley McCay, Ireland’s most experienced player.

She said: “We are absolutely shocked, but we knew we were capable of something special coming in as underdogs.”

Ahead of Sunday’s game, Ireland’s captain Katie Mullan said: “It’s a brilliant occasion for us but I have no doubt that England will come out and apply themselves.”