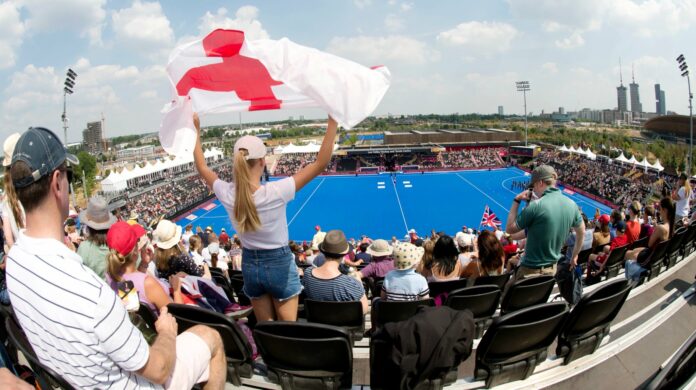 England’s players and coach were unanimous in agreement: the hosts now have a better understanding of dealing with the home pressures at the Women’s World Cup.

England drew 1-1 with India in their opening match as Lily Owsley netted late on at the Olympic Park to salvage a point.

The match was played out in front of a 10,000 sell out crowd, with many of Danny Kerry’s players having never experienced or run out to such an atmosphere.

Kerry said: “We just tried to talk about it rather than make it an issue. It’s new and it’s different for us.”

England next take on USA on Wednesday, with the Americans arriving only 45 minutes before their 3-1 defeat to Ireland due to transport issues.

Meanwhile, England’s three-day preparation time before the USA encounter could be be a blessing for the stars and stripes.

“We recover quicker than the opposition so longer days between games favours teams who aren’t as well conditioned,” said Kerry.

Owsley, meanwhile, has recovered brilliantly and looked intent on missing four months on the sidelines after breaking her hand before April’s Commonwealth Games.

“It was unbelievable and without doubt the best crowd and atmosphere I have ever played in,” she said.

“You could really feel the crowd in the last quarter and the home crowd really pulled it back for us.”

After Argentina and the Netherlands’ thumping results on Sunday, England will need to kick start their campaign against the US. Notching a few more penalty corner attempts may be handy.

They have now amassed 54 PCs since the start of the Commonwealth Games, but only netting five.

But midfielder Jo Hunter said: “It’s no concern for us. We aren’t worried and we’ll keep training and keep calling them.”

Hunter believes that England can now deal with winning expectations after overcoming the “unknown” of the Indian game atmosphere, which included a Red Arrows fly past and the general euphoria created by an opening World Cup game.

She said: “Until we stepped and ran out for the line out it really hit us and was like ‘wow, this is it, this is what we have been training for’.

“There were butterflies but it was a good nervous energy to use in your favour. The crowd can definitely help us when we get the ball into the space and moving forwards.”