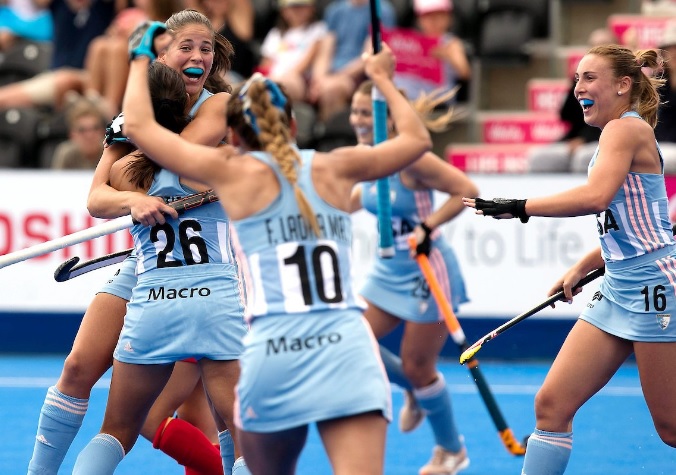 TV commentators were left in awe of Maria Ortiz’s sizzling goal for Argentina during their 6-2 win over Spain at the Women’s Hockey World Cup.

Watching the replay of Ortiz’s shot on the turn, BT Sport co-commentator Mel Clewlow was momentarily left short of words as she viewed the Argentinian’s travelling shot.

Her strike on the turn was hit with such precision at the top of the circle that it never looked like going anywhere other than the goal, as it then rifled under the crossbar and clung to the back of the net.

“That is absolutely incredible,” offered a bemused Clewlow.

The goal, after Spain had taken the lead, opened up breathing space for Argentina as they galloped to victory.

The strike has already been hailed as a goal of the tournament contender after day two of action.

It would have been understandable if Argentina’s young starlets had nerves in delivering in their opening match without the great Luciana Aymar in a World Cup side for the first time this century.

But they didn’t show any signs of them at the Olympic Park and they received glowing praise on social media afterwards.

“Starting this way is a great boost,” added Luciana Aymar.

Argentina’s victory was followed by current champions’ the Netherlands blitzing seven goals in the first half alone against Korea. Luckily for the Asian side that’s how it remained.

On another goal blitz day, New Zealand, the Commonwealth champions, came from behind to beat Belgium 4-2 in the final game of the day.

On day one Rosie Malone, playing only her second senior tournament, struck for her first Hockeyroos goal of the tournament and we asked yesterday whether this was to the youthful World Cup. On Sunday, Frederique Matla, 21, netted in 20 seconds as the Dutch rampaged their way through the Korean defence play after play. Matla is seen as ‘the next Paumen’ in Dutch circles.

“We were told prior to the match to go out and play attacking hockey in the China half of the pitch.We just grew in confidence as the match went on. This is our first World Cup for 42 years and we want to go as far as we can.”
Itay’s Jasbeer Singh

“I’m even more proud now after going away and having my son (Harrison) and coming back and still being able to score goals like that.”
Jodie Kenny on her match-winner, her 109th international goal in her 202nd appearance

“We came into a huddle and we said, ‘Come on guys, look there are 57 minutes left, let’s get out and play our game’.”
Argentina’s Agustina Albertarrio on going 1-0 down to Spain

Who to look out for on Monday

Sorry, hockey fans, nothing to see here. There’s no hockey!